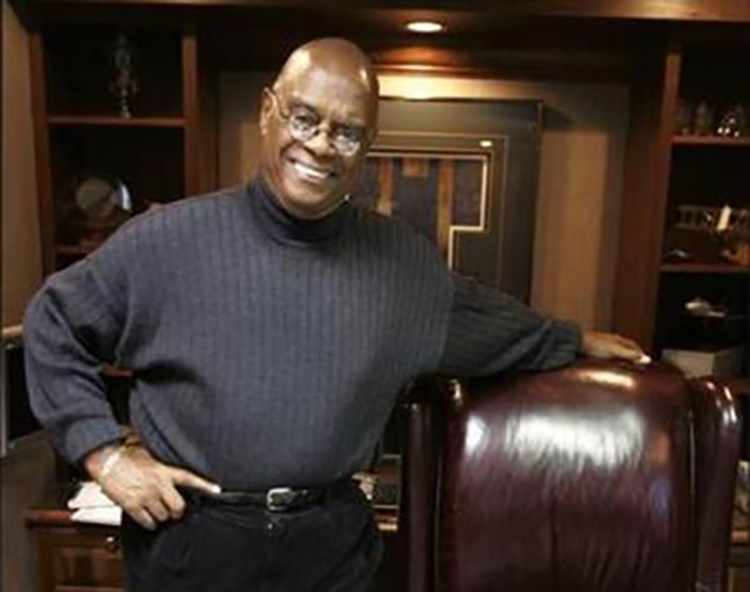 A 1964 NFL Championship playing alongside Jim Brown. I feel good about what I did as an NFL running back for the Cleveland Browns in the 60’s. The experience I had in athletics paved the way for my success off the field.

For me, my breast cancer was like a championship game. It required me to be very strong and tough. My wife Della was my head coach. She gave me no slack. She encouraged me to get out of bed and wouldn’t let my diagnosis take away my spunk. She told me to fight. It was like the last minutes of the 4th quarter, but at the end I’d be cured.

I’m a guy who can’t stay up very late. I never go to bed past 11pm and often wake up 4-5am. There’s usually something on my mind, I can’t get back to sleep and end up lying in bed. The fateful day in August 2004, I touched my right breast and felt a little round mass. The fact there was nothing like it on the other breast scared me a little. Della was asleep, so I woke her. I said, “I have a little thingy,” and made her touch my breast.

My primary care doctor thought the lump was probably a cyst, but wanted it out. I wasn’t that worried because he said, “Ernie, I’ve been practicing medicine for 37 years and I’ve never had a male with breast cancer.”

When I awoke from my mastectomy, the doctor was standing next to my bed and said, “I have good news and bad news.” The good news was he took out the lump. The bad news, it was malignant. Now, I was half asleep. I hadn’t paid attention to my body or my family history. It was stupid on my part. I lost TWO sisters to breast cancer. In hindsight, my mom likely had breast cancer too. I began looking at my mortality. Della was in the hospital room too. I remember her beige slacks looked stained, like she had spilled something on them. When we went home, she was very quiet. There were no tears, no emotions.

A couple of days after my surgery, I asked her, “Why isn’t any of this bothering you?” It was then she explained the doctor had gone up to her while she was drinking a cup of coffee. Della said, “When the doctor told me it was cancerous, I broke down. But, I pulled myself together. If I can’t handle this, you can’t.”

The treatments for my Stage 1 breast cancer whipped my butt. I was throwing up from the eight sessions of chemotherapy and couldn’t get to the bathroom. The seven years of Tamoxifen was a trip! Oh the hot flashes. My wife kept fans in her purse and sometimes I’d borrow one. Della was always there for me, pushing me. I attribute my state of mind and health to her.

Once I completed my treatment, I went back to my hometown in Georgia and spoke with an audience about my breast cancer experience. After my talk, people came over to meet with me. I noticed a woman standing alone looking nervous. Once the crowd dispersed she came over to me and told me about her husband. She had just lost her husband to male breast cancer. She said, “He was embarrassed about his breast cancer. I could not get him to go to the doctor. We lost him.” It just broke my heart.

I’m pleased to learn more men are talking about their breast cancer now, but we men can be hard headed. Up until now I have not done genetic testing. That’s going to change. I’ve realized I could be the bad guy in this situation. I could be the person spreading this through my family. Men, we think we’re invincible and breast cancer is only a woman thing. We need to make men aware. I have four sons and they have annual check ups. I have a granddaughter, and I worry about the gene pool. We’re all products of mothers and dads, and either can pass along a genetic mutation to their children. I promise when I get back to Ohio I will have the BRCA tests. Then I’ll sit down with my clan. Whatever the test reveals, I’ll be able to make my family aware. If you know you have a BRCA mutation, you have options. My children could do something with the information before cancer possibly comes. At least I’ll have done my part. I’m not going to be bashful. I’ll get with my granddaughter and say, “Here’s what it is.” At this point in life, I’ve already been through the worst. Whatever’s out there, I’ll deal with it. I’m an optimist.

In 1962 I was drafted by the Green Bay Packers, then traded to Cleveland after the preseason. I went to the Pro Bowl twice and won a Super Bowl. I also had one of the first ACL injuries in the NFL and had to retire after the ’68 season. I was forced to decide what to do with rest of my life.

I went to work with the Browns as a coach then a scout for a few years. Very soon after I left the Browns, I worked in student affairs at Case Western University, was involved in some small business ventures, then started my own business. There’s life outside of sports. My company has worked with GM, Honda, Nissan and other manufacturing plants. I’ve been very successful in the automotive industry.

Now I’m 67 and still see my breast surgeon every year. I also like to play golf with my wife a couple of days a week. Della keeps me stocked in pink. I like pink. I wear pink. When the NFL goes all pink each October, I wish they’d recognize the reality that men get breast cancer and can pass it around to children too. Whatever can be done to begin to get those knuckleheads out there, men, to realize breast cancer isn’t just a woman’s disease, we must go full steam ahead. Let’s get the NFL to add some blue!