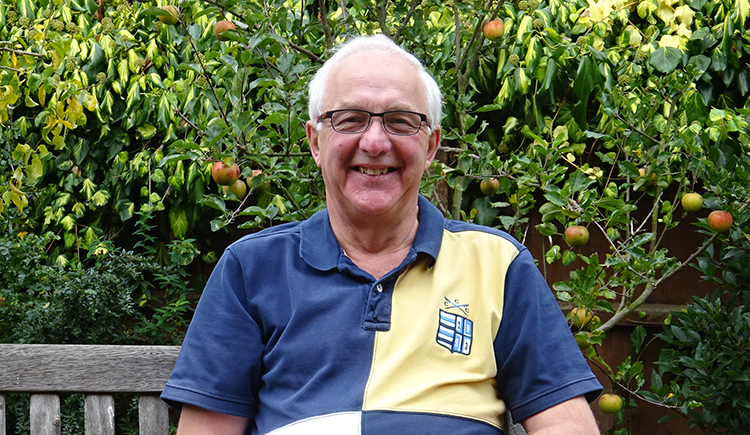 My journey began, like many other people’s journeys, in a quite innocent and unexpected way. I had married for the second time in August 1997 and the following month I slipped off the pavement outside of my home. This caused me to twist my left knee leaving me with a painful and swollen joint and I made an appointment to see my GP the next day, a Wednesday.

He examined my knee and told me I had just sprained it and that I should rest it for a few days. I mentioned to him that sometimes my left nipple felt sensitive if something brushed against it, such as when pulling a tee shirt on. I could feel a very small pea sized lump under the nipple, but I had no continuous soreness or discharge and no typical signs of any issues. He examined the area around the nipple and said he thought it was just something called calcified mastitis, apparently quite common in both women and men. However as a precaution he said he would arrange for me to see a specialist.

The next morning I received a telephone call from the hospital and an appointment was arranged for the following day. The specialist checked the small lump and also various lymph nodes around my body, looking a bit concerned when he checked under my left armpit. He said he tended to agree with my GP’s diagnosis, but would arrange for the lump to be removed and checked the next week.  He also wanted some lymph nodes to be removed and checked, but was not unduly concerned about the lump. The thought of breast cancer had never entered my head as I had never even heard of breast cancer in men – I had always believed it was a woman’s issue.

A week later the biopsy results were in.  The good news was that all the 15 lymph nodes were absolutely clear, however the pea sized lump was an aggressive type of cancer – I had breast cancer!!!  My wife and I were absolutely shocked. I was then re-admitted to hospital and had a mastectomy.

The prognosis was very good, as it appeared that the cancer was contained within the lump that had been removed. I was to have a course of six sessions of chemotherapy, each six weeks apart, which was to ensure any rogue cancer cells that might have escaped were eliminated. This was to be followed by 20 daily sessions of radiotherapy to the immediate area from where the lump had been removed to irradiate any remaining cancer cells. I then had to take Tamoxifen daily for five years.

The course of chemotherapy was very debilitating. Each session followed the same cycle. After about two weeks I would be very tired and weak and it would take the next two to three weeks for me to recover so that by the sixth week I would be strong enough to have the next session.

After chemotherapy treatment I started the daily sessions of radiotherapy. The purpose of this was to irradiate the immediate area around my left breast to ensure no cancer cells were left, particularly within my ribs. While the treatment only took about two minutes it involved a round trip of 90 miles. This treatment left me very, very tired and listless, which got worse as the treatment progressed and towards the end of the course I often fell asleep for short periods during the day. It took about four months after my last session before I felt back to my normal self.

I continued on Tamoxifen for the five years and was finally declared clear, although technically in remission.

In November 2003, I had an issue when trying to pass water and went to see my GP. He arranged for me to have various tests, including a PSA check.  I had water retention due to a restriction caused by my prostate being enlarged.

Further tests over the next three months, including a very uncomfortable biopsy where eight samples were taken from my prostate by a procedure using an instrument passed into my back passage, resulted in some cancer cells being found in three of the samples. It is well known that male breast cancer sufferers can be predisposed to prostate cancer, in the same way that women breast cancer sufferers can be predisposed to ovarian cancer.

My specialist explained that there was no certain way of determining whether the cancer was only present in my prostate or had already begun to spread outside into my body. He presented me with three options. First was “watch and wait”, which means do nothing but have regular checks to see if the cancer cells grew and show up elsewhere in my body, then make a decision at that time. This could be months or several years but carried the risk of any cancer cells spreading into my body from the prostate. The second option was to have radiation treatment on the prostate, but this treatment carried the risk of collateral damage to the surrounding organs.

As I was healthy and able to withstand major surgery, the third option was a radical prostatectomy, which involved the complete removal of my prostate. My specialist recommended we consider this option as the favoured route. This is a major operation and carries a high risk of damage to the many nerves surrounding the prostate, including some which are known as erectile nerves and responsible for certain feelings and feedback from your penis and sexual feelings. This also included the risk of incontinence. Having discussed these options with my wife, and having great confidence in my specialist, we decided to be positive and go with this option.

My specialist carried out the four-hour operation in March 2004 and my prostate was found to be about the size of a tennis ball. For reference, a normal prostate is the size of a walnut. Fortunately biopsies showed the cancer cells were contained within the gland, which justified our positive decision to follow my specialist’s advice and to go the major surgery route.

Recovery took several months, but as the cancer had not spread outside of the prostate gland it meant that I would not need to undergo the debilitating chemotherapy and radiation again. I now have annual PSA checks and consultations with my excellent specialist and so far all is well.

After all the treatment was completed I was referred to a geneticist.  Following the usual investigations, which took about 5 months, I was found to have the well documented faulty BRCA2 gene. I have a surviving sibling, a younger sister, and two children. As the position of the faulty BRCA2 gene was now known in my gene string it was relatively easy and quick, only a matter of about a month in fact, to check other family members for the faulty gene.

My sister decided to have the genetic test and came back all clear, however my daughters’ test has shown she is carrying the faulty gene and is therefore at risk of passing it on to her two children, our grandchildren. My son has decided against having the genetic test.

Family history has revealed that I had an aunt on my mother’s side who had a double mastectomy many years ago. It would appear that is the family line where the faulty gene originated from, but it is not certain as there is obviously no way of checking.

I have had two follow up meetings with the genetic councilor to discuss their ongoing findings, the last being about 5 years ago.

Now, here I am 18 years since my breast cancer diagnosis at the ripe age of 68 years, leading a very happy and healthy life. I am a great believer in having a positive attitude, whatever life throws at you, and have also been fortunate to have the support of a loving family. My father lived until he was 90 and I intend to be around even longer.  I believe that whenever your number is up then that is your time to leave this world.  Don’t sit around waiting for it, enjoy your life and family while you can. Treat every day as a new chapter and look for everything that is positive, don’t dwell on the past as you cannot change what is done.