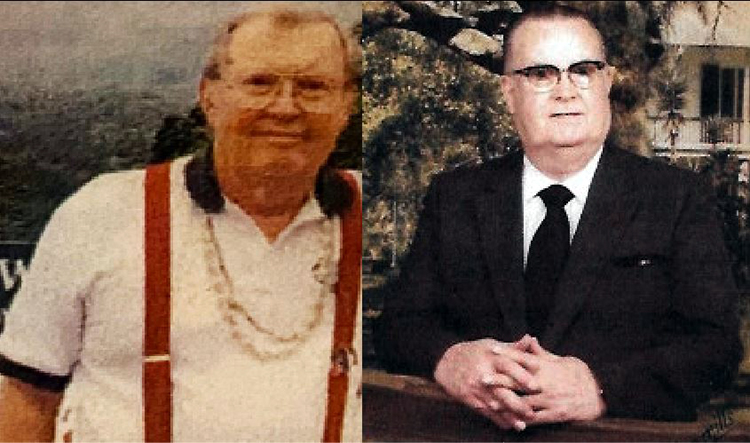 My journey with Male Breast Cancer started in 1983 when my Paternal Grandfather was diagnosed with Male Breast Cancer. He was 69 years old when diagnosed and a year later when he lost his battle. Back then they weren’t really sure how to treat him, which may not be the same today. He did have a radical mastectomy. Unfortunately, I don’t know much about his treatment, and he was diabetic as well. He had good days and bad, like most, but I remember he made it to the table at Thanksgiving and we all thought he was doing better, But, within a few weeks he played his Gospel Music as loud as he could (he loved this music) and passed away listening to his music. Funny story, at his funeral, my daughter was three at the time, and we all were standing at the graveside as as they lowered the casket into the vault, you hear this sweet little voice singing, Twinkle, Twinkle, Little Star. I tried to get her to be quiet and she responded to me that she was telling Great-Granddaddy goodbye. Everyone laughed, it was perfect timing, but to her music was the best way to tell him goodbye since he had such a great love for it.

Dad’s sister, my Aunt Carol, was diagnosed with her first Breast Cancer when she was 50 years old, in about 1998. She had a mastectomy, but no chemo or radiation. She was diagnosed with her second Breast Cancer at 58 years old, in 2006. Again, mastectomy and no chemo or radiation. It metastasized to her ovaries and uterus and she had a hysterectomy. She did not have reconstructive surgery. She did test positive for the BRCA2 gene mutation. She has a son that had a palpable lump and he tested positive for the BRCA2 gene as well. Her daughter had a double prophylactic mastectomy, she tested negative for the BRCA2 gene. But has not regretted her decision to have both breasts removed.

Dad’s mom, my grandmother, was diagnosed with Breast Cancer at 89 years old, she had a lumpectomy. The doctor said that it was “Old Lady Cancer”.

Dad’s other sister, my aunt, Marjorie was diagnosed with Breast Cancer probably in her 70’s.

Dad’s entire family has had or does have Breast Cancer, both male and female.

I do not have the BRCA2 gene, but there is some gene that has not been identified being passed down on my father’s side of the family. Doctor’s need to be educated in Male Breast Cancer and the fact that even if you have breast cancer on your paternal side of the family, and not on your maternal side, the genes can still be passed down.

Needless to say, this is very close to me and I am very passionate about Breast Cancer Awareness and especially Male Breast Cancer Awareness. But for some reason the media and medical professionals keep it quiet. I have been shouting from the rooftops since 1983 (the year my grandfather died) and especially since 2002 (the year my father died). But no one heard me. Oprah didn’t listen, Ellen didn’t listen, none of the talk show hosts listened when it came time for the Breast Cancer shows. But they sure would put on those makeover shows in a heartbeat!  I can go on and on.

Dad pretty much knew he had Breast Cancer (since his father died of it) but mom was recovering from a mild stroke that caused her carotid artery to occlude (we almost lost her) and he knew she was going to have to be well to take care of him so he waited to go to the doctor for treatment or even to tell Mom until five months after he noticed his crusty nipple. By the time he went to the doctor it had already spread to the lymph nodes under his arm.

Dad had a modified radical mastectomy and several lymph nodes removed in May, 2000. Nine of the lymph nodes were cancerous. Dad’s cancer spread from his breast to his lungs and then to his brain. The chemotherapy had destroyed his kidneys so he was on dialysis during his battle with breast cancer. Once it spread to the brain, all treatment was stopped. Dad died on July 18, 2002, at 67 years of age.

I personally have had several benign tumors removed in both breasts and they watch me very closely now, at the Vanderbilt High Risk Breast Clinic. I have had my lung punctured during a needle localization and nearly died from that. Dr. David Johnson, the Head of Oncology at Vanderbilt, was my father’s Oncologist when I had him moved from Owensboro, KY, to Vanderbilt. Funny thing is if it shows on an ultrasound that I have a cyst it winds up being a solid tumor. and if it shows it is a solid mass it turns out to be cystic.

Thanks for all that you do at MBCC and I am so excited to be a part of this Family! 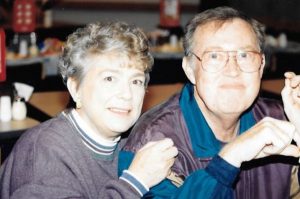 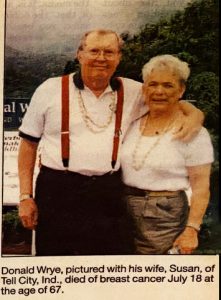 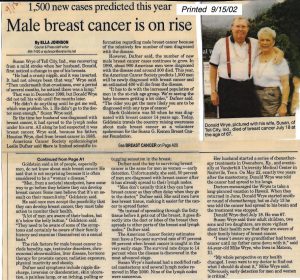