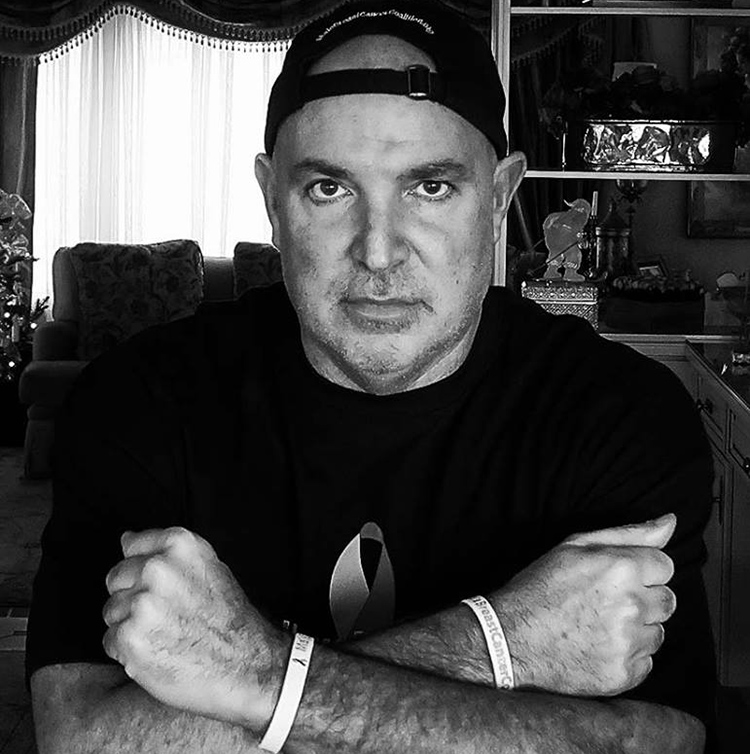 This won’t be a typical survivor story since, fortunately, I was not diagnosed with breast cancer. As proud as I am to be included with the survivors, I am one of the lucky ones that intervened before the dreaded “C” word could get me. My friends at MBCC, who I now call my second family, and who have endured surgery, radiation, and chemotherapy, along with those who have died, are the true warriors. Now that we have that straight, let’s move on.

My name is Don Krieff, I’m 54 years old, and practice as a neurosurgeon. I live in

Long island, NY, am happily married to Mary, and we have two children, Dylan,17 and Alexa,16.

I have a family history that geneticists salivate over. In 1986, my mother, Lois, was diagnosed with ovarian cancer. We eventually found out that she was BRCA2 positive. She became a part of the NIH BRCA Study. My only sibling, Dawn, was also tested, found to be positive, and enrolled in the study as well. My maternal grandfather and my uncle (mother’s brother) were both diagnosed with breast cancer.

Knowing that my mother and sister (and likely my grandfather and uncle) were carriers of the BRCA mutation, I knew I needed to be tested. Despite the fact that my sister found out very quickly about her result, I was not tested. Why? It’s pretty simple, life got in the way. I knew I would eventually get tested, but I didn’t make it a priority. Ironically, while all this was going on,

I was in medical school, neurosurgical residency, and starting my career as a practicing physician.

Knowing that I likely carried the mutation, a friend (whose mother died at age 42 of breast cancer) and I scheduled appointments for genetic counseling and BRCA testing in 2010.

What happened?  She went, I didn’t. I was too busy at work to spare the several hours of counseling prior to the test. Poor excuse, I know. But hey, I’m a guy!

Fast forward all the way to 2016, 30 years after my mother’s diagnosis, and I was sitting in the doctor’s lounge at one of the hospitals I work at, when I ran in to one of my friends who is a general surgeon. I told her that I needed to be tested for the BRCA mutation. She said, “No problem, stop by my office”.

From that point, things moved pretty fast. I tested positive for BRCA. I wasn’t surprised, but I was disappointed because this opened up a big can of worms for both my two children and me. If I tested negative, it would mean my kids would not be at increased risk. Sadly, this was not the case.

As soon as I got my results, I knew what I was going to do. I made a few inquiries about who to use as a breast surgeon and made an appointment. My plan was to have a bilateral mastectomy, as simple as that! As a male with BRCA, the risk of developing breast cancer would be in the 6-7% range. But, I knew I had a much higher likelihood, because of my two male relatives who had already been diagnosed with breast cancer. I remember the surgeon asking when I would like to do this. I thought, “no real reason to wait, I’m not going to wait until I get cancer”, and the surgery was scheduled during the Thanksgiving week in 2016.

Once I had an actual date, I started to think about how I wanted to handle the situation. I was in a unique position. As a health care provider, maybe I could bring awareness to people about BRCA and male breast cancer. As a neurosurgeon, performing complicated procedures daily, I wasn’t nervous about the surgery. The risk was low. Should I just have the surgery under the radar? My answer was a resounding no! I felt a strong obligation to publicize my story in the hopes that I could educate the public.

The week before my surgery, I sent an Email to Peggy Miller, director of the MBCC. Within fifteen minutes I got a reply. We discussed things in detail, and when I hung up the phone, I knew I did the right thing, 100%.

My surgery date was November 21, 2016. I went home the next day with two drains. Recovery went smoothly, and I was back at work in seven days.

I documented my journey with the help of the MBCC. Lori Berlin reached out to CBS, who put my story on the evening news. Daily Facebook posts and pictures were my norm.

I am so proud of how many lives I affected. I got so many personal emails and replies on Facebook about my courage and strength for sharing my story. This experience changed my life for the better; there is no doubt about it.

Remember this though, the true heroes are the breast cancer survivors. I just did what I knew was the right thing—sharing knowledge.