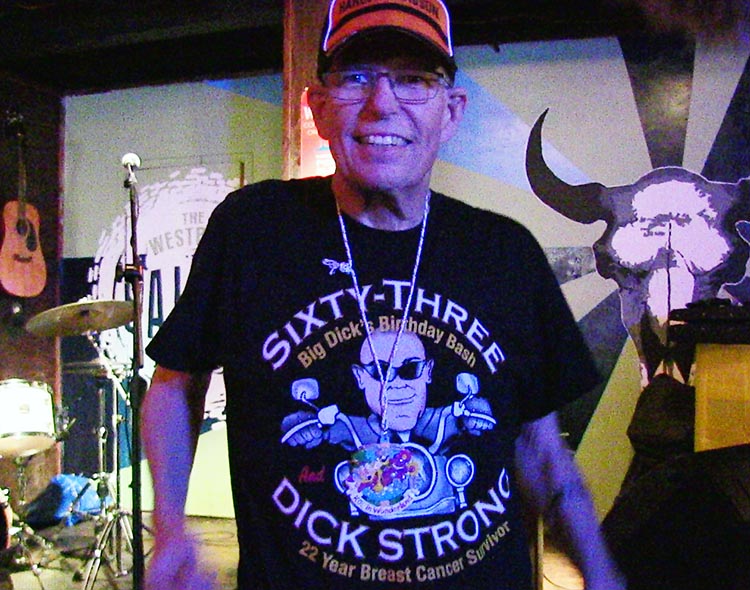 Last month I was told I have six months to live. My first thought was I’d better get stuff in order. And, I should start drinking my good wine! I want to get all my ducks in a row and get all the bills paid. We have a 15-year-old AC unit that needs to be replaced soon. We have already replaced our old furnace and hot water tank. I am doing all of this because when I pass, I don’t want my wife Susie to worry about those things. I’m the man of the house. I’m supposed to take care of things and put everything in order. I want to make sure everything in life is wrapped up.

My recent bone scan showed the cancer is in even more places than the doctors thought. My wife and I discussed it and decided that we wanted to ask the doctor about my prognosis. We had been told five years ago that my cancer was Stage 4 … not curable, but they could “control and contain” it.  Now just five years later, we have been told that I have less than six months left. The cancer is too widespread for radiation and my bone marrow too compromised for any more chemotherapy. I have had three blood transfusions in nine months trying to boost my blood counts.

My family and I have been dealing with my breast cancer for a long time now.

Twenty seven years ago, I was taking my morning shower when I felt a pimple like spot on my left breast. Clear liquid would come out of it when I applied pressure. I went to the doctor and he said just to “keep an eye on it.” Five years later, when I applied pressure in the same spot, blood came out and back to the doctor I went. Now he said, “Oh my, we better do something.” I never had a mammogram or ultrasound, not even an x-ray. A biopsy revealed I had breast cancer.  A mastectomy was performed and 25 lymph nodes were removed. Because 12 of the lymph nodes were dirty, I was diagnosed with Stage 4 cancer. Back then, cancers were staged a little differently. Maybe today it would be more like Stage 3. The doctors suggested a mastectomy, chemotherapy, radiation, and even a full bone marrow transplant. I had the mastectomy and chemotherapy treatments for six months, “The Red Devil” Adriamycin plus Cytoxan. It was awful, but I got an all clear that year.

Twenty years later I was shoveling the driveway, slipped and fell on some ice, and broke my hip. I was taken by ambulance to the hospital. When the ER doctor looked at my x-ray, he asked, “Have you ever have cancer?” When I told him yes, he said, “Well, I think it’s back.” The next day I had hip replacement surgery.  The biopsy confirmed the ER doctor’s suspicions. The breast cancer had metastasized to my bones. It had eaten a portion of my femur and that is why the bone shattered when I fell. I then began a long journey of physical therapy followed by radiation and chemo. I was told I would be on various treatments for the rest of my life.

In the last five years, I have had traditional radiation to my ribs, hip, lower spine, sternum, pelvis, and neck. I have had Cyberknife radiation to my thoracic spine.  I have had Rapid Arc radiation to the base my skull. Because the tumor on the base of my skull was “in a very busy place,” I had to have a mask made to immobilize my head and was bolted to the table for 10 treatments. Not easy for a man with claustrophobia. In all, I have had 46 radiation treatments. I have been on hormone suppressant drugs such as Arimidex and Exemestane. I have been on eight different types of chemo treatments, including a new one that was released since my diagnosis, called Ibrance. Even with all of this, my tumor marker has gone from 48 to 556. The doctor describes my cancer as slow moving, but relentless. My wife and I describe it as a roller coaster, a constant flip between highs and lows.

For a long time, all the cancer was on my left side, so I used to say I was “all right!” As widespread as the cancer is in my bones, it has never spread to my other breast or any organs. The doctor says I am in a very small percentage of breast cancer patients with bone-only metastasis. Recently I had injections of radioactive isotopes. This has helped with the pain some, but the treatment will not prolong my life. It will improve my quality of life though, and that is priceless.  Because of my two sons, I had genetic testing done and the results came back negative. I do not carry the gene mutation for breast cancer.

This disease has taken a toll on my body in ways I did not expect. I have lost 130 pounds and about two years ago the cancer paralyzed my vocal cords. The doctors suspect there could be a tumor sitting on a nerve somewhere. People may have trouble hearing me, but I want my message to be loud and clear. MEN HAVE BREASTS TOO, SO MEN GET BREAST CANCER TOO! I want to make sure in this age of equality that everyone with breast cancer is treated the same. When men ask about reconstruction surgery they shouldn’t be told, “We don’t give that to men,” like I was. They shouldn’t hear, “Tell the people you were injured in the war,” like I was told. You would never say that to a woman.

Don’t let any doctor tell you not to worry. I’m still really upset my doctor didn’t investigate more thoroughly the first time I saw him 27 years ago. When I had a lump on my rib years ago, my doctor ignored that symptom too. Even now with my current doctors, we have to ask for x-rays and scans. We’re calling the shots and that’s frustrating.

As long and difficult as this journey has been, cancer has not stopped me from living a great life. It means a lot to have a supportive family here with me during the good times and bad. I just turned 63 years old and I want to spend all my time with my family. You know what’s coming and can’t do anything about it.

I hope one day there will be a cure for this dreaded disease. I hope people will look back at breast cancer and it will be like how we look at polio today. I’m counting on people like Bret Miller to continue spreading the male breast cancer message. He’s the best advocate I know. He’s a good looking guy and I think Bret can go far and teach people about the non-discriminatory nature of breast cancer.