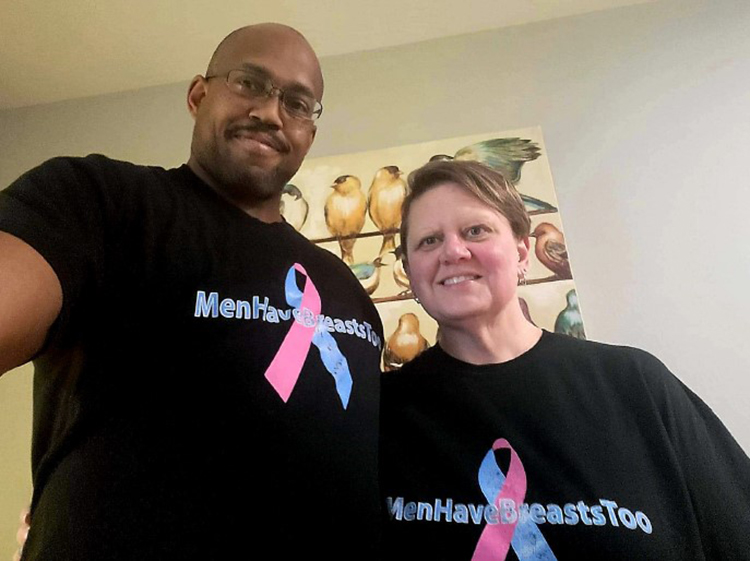 I was 42 and living a regular life: Married, 2 dogs, good job.  I enjoy working out.  I had been lifting weights for some time.  That’s why I didn’t pay too much attention to the lump I had on my chest.  I noticed it, but I figured it was from muscle strain, or something workout related. A couple times I had hit it on something, and it caused me to wince.  One night, my wife cuddled up to me on the couch.  Her head landed on that lump, and again, I winced.  She felt the lump.  It was near/underneath my right nipple.

The next day, my wife was jokingly mentioning it to a coworker when her joke was shut down.  The woman she was talking to wrote a number on a piece of paper and said, “This is the name and number of my surgeon.  You need to call him, tell him what is going on, and get your husband seen immediately.”

Without hesitation, we made the call, explained what was going on, and I was seen within a week.  The surgeon we were referred to was a breast cancer specialist.  Even still, after examining me he said it was probably a form of gynecomastia.  Just to be sure, he wanted to do a mammogram.  First of all, there is no male waiting room for a mammogram, so I was escorted to a private room in my pink gown. Also, I’m 6’4”, and did I mention that I lift weights? Bending over, leaning and squishing relatively hard tissue flat is nearly impossible, but the gals know what they’re doing, and they managed.

My wife is a teacher, and her school year had just ended, so she headed to Texas to visit family.  We hadn’t heard anything, so we figured it was all fine.  While she was gone, I was called in to go do a biopsy.  I was told it would hurt, but the extreme bruising I had after it was somewhat painful.  When my wife returned, she was scheduled for her mammogram, and she was also called for a biopsy.  This wasn’t stressful at all. (Insert sarcasm) I was told that I’d get a call to come into the office for my results.  Instead, I got a call and right there they said, “You have breast cancer.”  That started our long journey.

I went the next day to meet with the surgeon, and we scheduled a mastectomy.  A nurse from the oncology office met us there to answer any questions.  She is now considered a lifelong friend, although we laugh, because we thought she was stalking us! (showing up to my appointments and all!)  My wife’s biopsy results were to be given the day of my mastectomy.  The wonderful team called her the night before my surgery instead since they knew we had a lot on our plates.

After my mastectomy, we got pathology report back and realized that I’d need chemo and radiation too.  I was stage 2B, HER 2 positive.  I did 6 chemo treatments, and 33 radiation treatments along with several more Herceptin infusions. I tolerated chemo okay.  The Neulasta shots afterward knocked me on my behind.  The doctor described it as a party in your bones.  The aching was no joke. I did of course lose all of my hair.  It never fully grew back.

During this time, I had a ton of support.  Our family and friends really rallied to offer help, support and prayer.  We participated in Making Strides, and attended the annual Pink Ribbon Rally at Cox hospital here in Springfield.  I was lucky that my job was very understanding. We also were sent to the Breast Cancer Foundation of the Ozarks (BCFO).  We didn’t know what to expect, but they helped us with bills.  They also reached out to ask me if I’d like to be involved in spreading the message.  Since that time, I have done interviews on the news, radio and for the newspaper.  I have spoken openly at our cancer support group, and I will chat with anyone that is willing to listen about the importance of men checking themselves.  So many people STILL aren’t aware that men can get breast cancer.  This year, I’ll even be walking in the yearly fashion show.

During the time of all of the treatments and big news, it is easy to feel alone.  My wife looked all over online, and that’s where she found Bret Miller 1T Foundation.  It was eye opening and helpful to know there was a network of men that understood exactly what I was going through.  This April, for the first time ever, I will meet a fellow male breast cancer survivor….Bret Miller.  We will both be walking in the fashion show and spreading the word.

“Guys, don’ be afraid to touch yourselves.” 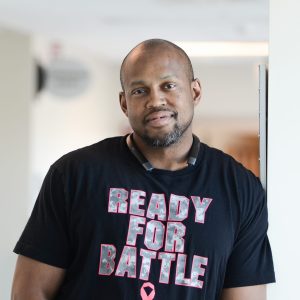 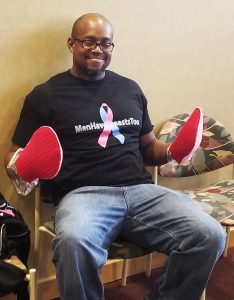