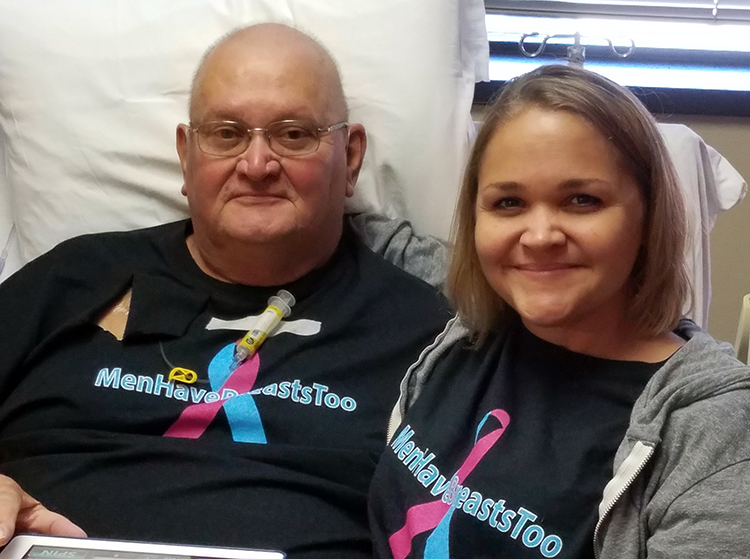 Six months after my Dad, Dennis, first knew of his lump, breast cancer was diagnosed on the left breast under an inverted nipple. The tumor was the size of a large egg (3 1/2 cm). Dad had been feeling tired that entire winter, but chalked it up to being older since he had recently turned 70. He went to the doctor on April 3, 2017 for his initial visit with his family physician partly because Mom made him go. On April 10 he visited Katzmann Breast Center at Mercy in Des Moines, Iowa, for a mammogram and an ultrasound, followed by a biopsy the next day. On the April 18, Dad had a second biopsy. On April 18, at the age of 71, Dennis was diagnosed with Stage 2, HER-2 positive breast cancer.

Surgery had been scheduled, but was postponed because of the HER-2 positive diagnosis. On May 9, an MRI showed the cancer was confined to the breast, and the PET scan nine days later showed it hadn’t spread elsewhere in his body. On May 16 Dad met Dr. Wehbe, the oncologist that is treating his breast cancer. Our family loves him, since he not only treats Dad’s cancer, but also deals with him very kindly. Dad is not only dealing with breast cancer, but he is also AFIB and is diabetic.

Dr. Wehbe ordered an echocardiogram of the heart to see if his heart could handle the aggressive chemo treatments. The results were good, so a port was placed on May 26, by Dr. Beck who will perform Dad’s mastectomy in September, 2017. The chemo treatments started on May 30, and are three weeks apart for about five hours each time. The infusion drugs used include: Perjeta, Herceptin, Taxotere, Carboplatin, accompanied by Benadryl, and a nausea shot and steroids at the beginning of treatment. A Neulasta medication was applied on his arm to deliver stimulation for white blood cell growth to fight against infection. He has had chemical chemo burns on his head, hands, and feet, and experienced extreme diarrhea and dehydration that put him in hospital for a week. The chemo treatments have altered his diabetes and heart medication because of the side effects of all the drugs.

Over all, Dad has handled the process pretty well. He says, “Cancer started to kick my ass, but I kicked back”! It was a very difficult time, and without his family this process would be worse. My Mom has been his devoted caregiver to help him shower and encourage him to eat when he hasn’t hungry. They are both retired, so it has been easier having a work schedule to worry about.

Our family has grown closer and have bonded to support not only Dad, but Mom too. He is not fighting alone. Not only has our family bonded, but our friends have supported Dad with logos on 50-plus race cars (which dad loves but has missed attending all summer because he is too weak to go), and PopoPower wrist bracelets to support Men Have Boobies Too (see pictures). He is Popo (grandpa) to his four grandchildren.

Through it all, Dad has missed not being able to go to the races every weekend and support his favorite drivers, as well as his rounds of golf. The breast cancer treatment disrupted plans to have family time over the 4th of July long weekend, since Dad was in hospital the entire time. Fortunately, his children (Todd, Craig and myself, Mary) have collaborated to make sure Mom (Delores, aka-Sid) and Dad are taken care of fully.

We have taken it upon ourselves to educate each other and everyone we meet about male breast cancer awareness. It has been a rough five months over summer, but we pray and support each other, and our love shines through all the negative aspects of cancer and we are prepared for the rest of the treatment that follows. We feel we are blessed to have a strong family unit, and pray that others that are fighting any types of cancer do too. It takes a village to raise and support each other in this process, and positivity is the key.

Men can get breast cancer too, not just women!