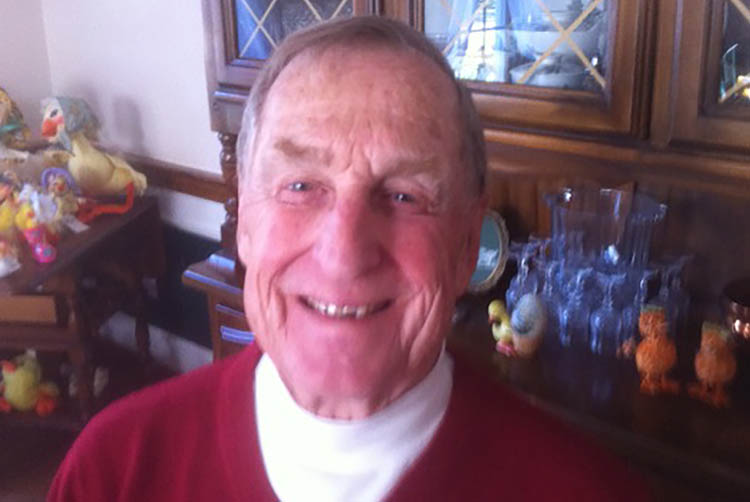 The only way people are going to learn about male breast cancer is if we talk about it. I’ve become extremely outspoken since my diagnosis at age 60.

It was a beautiful morning in 1997 and I was heading out to play golf. While in the shower I felt something like a pea and noticed my nipple was inverted. I didn’t think anything of it. Why would I? Men don’t get breast cancer.

Two days later, the same thing happened again. The lump and inverted nipple still present. I showed my wife and we decided to call our GP. My doctor, a woman, assured me it was probably nothing, but told me I needed a mammogram. What? Men don’t need mammograms.

It showed something that needed checking. The doctor wanted to do a biopsy. His office was next to the hospital so they did the biopsy in one-half hour.

Bam. “You have breast cancer.” He said I was only one of a few cases he had seen in his career. I asked him “What do we do now?”

The first thing was to find the best surgeon in town. There was no time to mess around.  Three days later I heard about sentinel nodes, surgical plans, mastectomies – things I knew nothing about.

The doctor said it would be about 30 days before surgery because of his heavy operating schedule. Two days later I got a call and the doctor told me he had postponed less critical surgeries to get me in and I should come in for my surgery the next morning.

Less than two weeks after I first noticed the inverted nipple, I had a modified radical mastectomy. My breast cancer was caught early and I was a very lucky man.

A couple of nights after being home from the hospital, I remember waking up in the middle of the night worried about the drain in my arm pit. It was filled with blood clots, so we went to the emergency room. I was told everything was normal, but it would have been nice if the doctor warned me.

Thankfully I had a very understanding wife by side who helped me through everything. We told our very small family and shared my breast cancer news with friends.

I think God gave me this breast cancer for a reason. I was looking for a clue, but didn’t know why. Breast cancer is unusual in men and I survived.

A year after my diagnosis I got a call from the American Cancer Society and learned about their Relay For Life event. They asked me to come over, but I didn’t really know much about what they were doing. It was a Friday night, I was put in a tent and given a brown bag. There were notes from people honoring loved ones with cancer and we wrote the notes directly on the bags. Then the bags were filled with sand and candles and illuminated in the dark. We did what’s called a “survivor lap” around a track and people began clapping. It was then I said to myself “I think I’ve found out why I’m here.” I cried. It was the first time my wife ever saw me cry like that.

Because of my professional experiences as a management and training consultant, The American Cancer Society asked me to speak with people who conduct Relay For Life events throughout the USA. A few weeks later I got

a call about helping to build a  national leadership team. The team taught volunteers how to run the Relays, fund raise, build teams, etc. When my wife developed symptoms for pancreatic cancer I cut back on my travels for ACS and had to slow down. She had Whipple surgery and God was with us-she did not have cancer.

If you think something’s wrong with you or anyone in your family go get checked. If something’s different, if you haven’t had it before, if it came out of nowhere, go get it checked. Don’t be a tough macho guy. Early detection is so important when it comes to male breast cancer. Leave no stone unturned. If it takes a biopsy to determine whether you have cancer or not, do it. I thought my symptoms would go away and they didn’t. This was so different, remarkably different.

There were few, if any, conversations about genetic testing 18 years ago. I took Tamoxifen for five years and had no side effects. For me, it was just like taking aspirin. I did develop lymphedema about a year and a half after my surgery. It took a year to go away and I traveled around the state of Massachusetts talking about lymphedema and male breast cancer.

I found that I can talk about breast cancer with women in a way men can’t because I can empathize with the ladies. I know what it’s like to get a mammogram and have those plates push together and wait for results.

I am part of a Reach to Recovery organization with the American Cancer Society and have spoken with many men diagnosed with breast cancer or recovering from surgery. This is another reason I think I survived breast cancer.

So—here I am—18 years of survivor. I am pleased to participate in the Male Breast Cancer Coalition. I look forward to being an active member.