Breast Cancer came knocking on my door in 2011. My wife, Kalaya, and I were in Phuket, Thailand, checking out hotels for my daughter’s wedding. It was a great location, and as long as you are not paying for the guests’ flights, much cheaper than the UK! I spent a lot of time driving around there and found that the car seat belt was rubbing on my chest and making it sore. I found a small lump next to my left nipple, and we assumed that it was probably a cyst; the temperature was around 35C and very humid, so it seemed logical. I decided to go and see our GP on return to the UK, and meanwhile used a plastic bag to keep the seat belt out of the way and put it out of my mind for the rest of our time there.

My GP said he also thought it was a cyst, as did the consultant at Poole General Hospital, who arranged for me to have a minor operation to remove it. I went into a day surgery unit for the operation, done under local anaesthetic, was chatting to the surgeon while she was working, and assumed that everything was fine. But, on being wheeled out of the theatre, she told me she had found a small tumour and had just sewn me back up again.

Surprised is an understatement. I had been having treatment for minor skin cancers since 1998. I have blond hair, blue eyes and fair skin, and as a child growing up in Cornwall, I spent every hour that I could on the beach, swimming, surfing or playing football. I got sunburnt on a regular basis, the treatment for which was calamine lotion, wait until the sunburn faded and then get outside again. Of course, what nobody knew then was the genetic damage I was doing to myself, something that would come back to bite me in later years. I have had laser treatment, cryotherapy, surgery and topical creams over the years, all successfully removing the cancers, and so was not frightened by the concept of having cancer. However, it was Breast Cancer that scrambled my mind, this was a women’s disease, how could I have it? The most difficult part was telling my children what had happened, as at that time I knew no more about the disease than they did.

The next three days were a whirlwind of activity and very confused thoughts, but the medical system took over and soon I was having a left side mastectomy. Very fortunately the tumour was only 17mm in size with clear margins and no lymph node involvement, so there was no need for either radio or chemotherapy. I was prescribed Tamoxifen for five years and annual mammograms, these have now finished, as it is assumed I am breast cancer free.

In terms of dealing with the fact of having had Breast Cancer I was lucky that the time interval between finding it and having it removed was very short, three days in fact. However, coming to terms with it over the next few years was difficult. My family and work colleagues were very understanding, but I was embarrassed to be seen without a shirt on. Over many years I had been going diving in Phuket, after the cancer I found myself getting changed on the dive boat in remote dark corners, not wanting to be seen. Going to the swimming pool back in the UK I started wearing a rash vest to hide the scar. As the years have passed, I have come to accept it but still do not go topless outside the house.

In 2017 I was out cycling and in avoiding a large tractor managed to fall off my bike and break my hip. Not clever at all, but the silver lining was that the subsequent blood tests showed that I had a raised PSA and slight Osteoporosis. The PSA indicated prostate cancer – this was checked, found to be low level and I was put on what is called Active Surveillance in the UK, three-monthly blood tests and the PSA levels monitored. The Osteoporosis is assumed to be a side effect of having taken Tamoxifen and I am now on a biophosphate and calcium/vitamin D tablets regimen.

In 2017 I had another skin cancer episode, this one was more serious, and I ended up having an urgent surgery on my scalp which removed a very aggressive Squamous Cell Cancer (SCC) and bits of the surface of my skull.

In Jan 2019 everything seemed to happen at once. The SCC returned, this time in the lymph nodes in my neck. At the same time, my PSA levels had risen enough for the Urology Department to take more active measures. As the neck cancer was more serious, I was put on Hormone Treatment for the time being. As part of the preparation for the neck cancer, I had a full body PET Scan and this showed up something amiss in my colon. It never rains but it pours I thought! I had a radical neck dissection to remove the lymph nodes, followed by a colonoscopy which found a growth in my bowel, biopsies of it were indeterminate so the consultants decided to carry out a right side hemicolectomy and removed the upper part of my colon through keyhole surgery. Final analysis of the growth was that it was not cancerous, but well on the way to becoming that way, so the operation was certainly worth doing.

So, what have I learnt from all of this?

Firstly, use sunscreen, it works and will save a lot of trouble in later years.

Secondly, if you think anything is amiss with your body act immediately, don’t wait and be prepared to be pushy with the medical profession. I have been very lucky that my cancers have been detected at early stages and so treatment for them has been successful.

Thirdly, we should push for genetic testing for all cancer patients. As I have had breast, prostate and colon cancer, I have been tested, initially for defects in BRCA1 and BRCA2 genes which came back negative, but they are continuing testing other genes, thinking that there must be some common defect which has caused the cancers. I am not so sure – I have spent the whole of my working life in the telecommunications field, 22 years in the Army working on high power HF systems, Ground Satellite Stations and all manner of microwave radio systems. Then I moved into the mobile phone industry for 17 years working as a Field Engineer maintaining the Base Stations. I am certain that I have had a very high lifetime exposure of radio frequencies which may be the reason I have been susceptible to cancers.

And finally, enjoy life now. Do not put off doing things you might have planned to do in later years, as none of us know what is around the corner. I took early retirement, and now make an effort to enjoy every second – being a father and grandfather, travelling the world when we can, and just being very grateful to still be here! 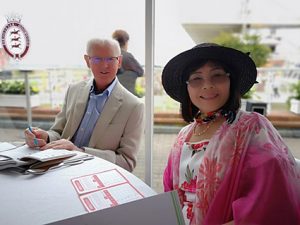