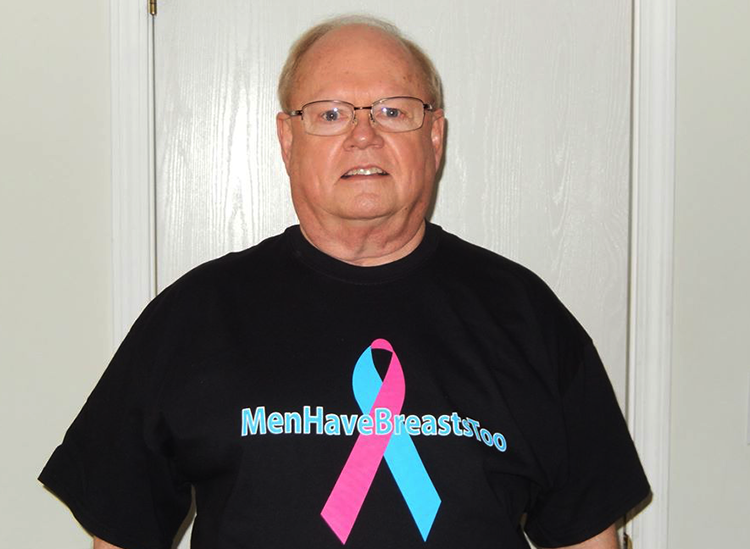 I work in the Security/Safety department at Henry Schein Distribution Center in Indianapolis, Indiana. I am a 64-year-old male and have been married to my wife Wanda for 42 years. We have two sons, a daughter-in-law and four beautiful grandchildren. I guess we would be considered a normal family, but the challenges we were given March 2010 were less than normal.

On March 6, 2010, I went to the emergency room with severe pain on my right side. Several years before I was diagnosed with gallstones, so I was sure I would receive something for pain and everything would be fine. After several tests, the doctor informed me my gall bladder was bad, something I already knew. He stated my gall bladder would need to be removed, but he would still like to do a CT scan to see how bad it was. I didn’t know the CT scan was going to save my life.

After the scan was reviewed, the doctor came back to my room and informed me my gall bladder was bad, BUT there was also a large mass in my left breast. I don’t believe at that time I was thinking cancer. The doctor scheduled an ultrasound of my left breast for two days later. I was told to go to the “Women’s Center.” I didn’t like the sound of “The Women’s Center,” but my wife said if she is with me everyone will think it’s her appointment.

When we arrived the receptionist handed me a form to fill out. The only question on the form that pertained to a man was my name. Next I was told I’d need a mammogram. I asked the technician, “Are you serious?” She was and it wasn’t pleasant. Mammograms are bad enough for women, but God did not design men for the mammogram. Then a doctor came in and said she would like to do the ultrasound herself. She found the mass and asked when would be a good time to schedule a biopsy. I said right now, because by this time I’m getting nervous, so she proceeded. She took several samples and said she would have the results in three days.  I told her as soon as she got the results to send them to my family doctor and have him call me immediately.

Two days later on Thursday of that same week I received the call. Now, being in the security field for 30 years and serving in the United States Army, I have always trained to be prepared and ready for the unexpected. What I was about to hear was the unexpected. My family doctor said, “Darrell, I didn’t want to tell you this on the phone, but you said you wanted to know immediately. It’s breast cancer.” I wasn’t prepared for that. To be honest, I don’t remember the drive home from work.

When my wife got home I told her the news. After many tears and prayers we started researching the internet for surgeons who specialized in breast cancer. We found one with 24 years of experience and were able to get an appointment two days later. She was very caring and talked with us for over an hour explaining the procedure. She had a team of three other surgeons and two oncologists who would be assisting her.

March 31st, just a little more than three weeks after my trip to the ER, I had a six-hour surgery to remove my left breast.  When I woke up, I received some great news. They got all the cancer! The doctors told me they removed my gall bladder and the cancer. They also removed two lymph nodes and tested them in the operating room. The lymph nodes tested okay, but they would still send them to the lab to make sure. Two days later I’m hit with the news that one of the lymph nodes had cancer in it, so I would need another surgery to remove another row of lymph nodes.

The ups and downs of this journey were more than I was expecting. I spent 10 days in the hospital. The next surgery was successful and after four rounds of chemo, I am now cancer free.  Don’t get me wrong. I still think about it every day and in the back of my mind I think about the cancer returning, but this story is not all gloom.  I have tried to stay positive during this whole process. Good things have come out of this experience and I’m sure more will come.

My family and I are now involved with Susan G. Komen Race for the Cure. I am an ambassador for Komen. I also volunteer with the Reach to Recovery program with the American Cancer Society. I had the honor of being a Model of Courage for the Ford Warriors in Pink in 2012 and 2013. I speak and do many interviews telling my story. This is not just a woman’s disease or a man’s disease. It affects the entire family. My family has been my best support system. Men, breast cancer is serious. We don’t think breast cancer can happen to us, but it can. It’s not as common for men, but it can happen. The reason men die from breast cancer is because they think it can’t happen to them and they ignore the signs. Also don’t be embarrassed to talk to your doctor about breast cancer. Awareness and early detection is the key. I enjoy speaking about my experience and do every chance I get.

Each morning when I step out of the shower I see this ugly scar from the center of my chest, where my breast was, to my back. It reminds me of my journey and how fragile life is. I can live with that scar on my chest, but wouldn’t be able to live with the scar on my conscience knowing I had a chance to tell men about breast cancer and didn’t.