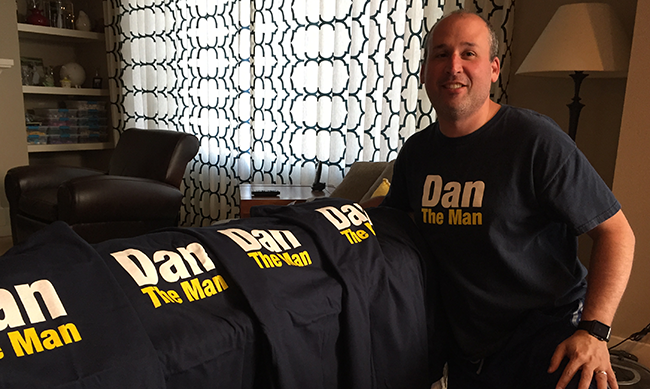 Breast cancer has been prevalent on my Mom’s side of the family. She had it (and beat it), her mom likely had it (and died young). Many of my cousins have had it and many have tested positive for the BRCA-2 gene mutation. So around eight years ago, right before we were about to have our first child, I got tested for the gene mutation and it came back positive. We knew that meant an increased chance for prostate, colon and yes, breast cancer, but prostate and colon were the ones we really were keeping an eye on since I also have had Crohn’s Disease for the past 30 years. There isn’t much you do with a BRCA-2 positive test result except stay vigilant and hope that medical science makes big progress before it becomes an issue for your kids (in my case, I have two young daughters, so we will have bridges to cross in the future around this).

So, when in May of 2015 I felt a hard mass in my left breast, my wife made me immediately go see my primary care physician the next day. Now, my primary care physician is the nicest guy in the world but he’s two years out of medical school and while he’s great for a sinus infection, he generally prefers to send me to specialists when it gets complicated. His response to the mass was “I’m sure it’s nothing, but if it is cancer, best to get it checked out quickly because male breast cancer is highly fatal.” Nice. He meant well. Initially I couldn’t get in for a mammogram for a week, but my wife was having none of that. Swedish Hospital is the big hospital system in the Seattle area and they were able to get us in at their main medical campus downtown the next day. Mammograms are fun. Clearly designed by men to torment women. After the mammogram was an ultrasound. The radiologist was fantastic. She said the mass needed to be biopsied and while she couldn’t say for sure, it was almost certainly cancer. Big needle. Into the breast. More fun times. The radiologist arranged for an appointment the following Tuesday with the head of breast surgery at Swedish. By then the biopsy results would be back and we’d have a clear direction to go.

Fast forward and I’m ER and PR Positive and HER2 Positive. Stage IIA. Good prognosis. Because I’m HER2 Positive, my chemo was pre-surgery. Chemo was initially Taxatore, Perjeta, Carboplatin and Herceptin. That only lasted one round though, as it set a bomb off in my digestive track and was just all around bad news. Subsequent rounds consisted of Taxol, Perjeta and Herceptin. I underwent chemotherapy throughout the summer of 2015, culminating in a contralateral mastectomy in October. The surgery was a walk in the park compared to the chemo. There was still a bit of tumor left when they performed the surgery, which is less than an optimal result after chemo, but there was no invasion into the lymph nodes, and the surgeon was confident she removed all the cancer left. I was fortunate in that after a consultation at Dana-Farber in Boston and my oncologist in Seattle’s own opinion, I did not need to undergo radiation therapy.

It’s now May of 2016 and I have five more rounds of Herceptin to finish up, and I’ve been on Tamoxifen for the past six months. Neither of them is particularly bad, although the Herceptin is definitely cumulatively making me tired after each round.

Since my diagnosis I’ve also had an endoscopic ultrasound to screen for pancreatic cancer and will continue to have one of those every year. There is no data that supports this, but the experts at the University of Washington feel there is enough evidence to indicate this type of screening in high risk patients like myself, because of the BRCA2 mutation. I’ll also be seen regularly by my oncologist for general surveillance. She indicated I have a 10% chance of recurrence. I can’t really spend too much time thinking about that though, as it’s just a number.

As a 41-year-old man with two young daughters and a wife, I, like anyone else with this disease, am highly motivated to do whatever it takes for the best possible outcome. When I tell people the type of cancer I have, there is always a pause and a look of disbelief. It happens. We know it happens. The more the word gets out, the better off other men will be. Breast cancer in men, contrary to my primary care physician’s initial statement, is not a death sentence. It sucks, just like it does for the thousands of women who get it, but there is light at the end of the tunnel.

You can stay up to date on my journey at: https://twitter.com/danmiller3