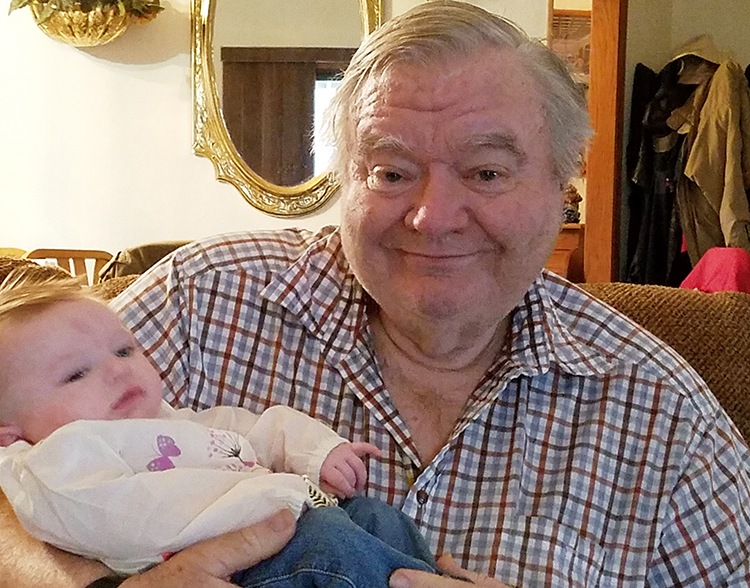 In the middle of March 2016, I rolled over in bed and something stung me in my chest. I went to the bathroom and looked in the mirror, I saw nothing, no red spot or anything. But, I felt it and found a lump which hurt when touched. That started me worrying and so on my next physical, two days later, when the doctor was done, I asked, “Hey doc, what’s this? It kind of hurts.”

He set me up with an appointment at a women’s clinic for a mammogram a day later. I got to the clinic, and checked in. Several ladies were there, no doubt wondering what a big hairy guy was doing at this clinic. You know the place, pink everywhere, puppies and kittens on the walls and not a Sports Illustrated anywhere. When I explained my doctor sent me there for a mammogram, they got a bit friendlier. They did a left side mammogram, vertical and horizontal squeeze, then right side. Then back to the left side. Then an ultrasound and a biopsy. Afterwards they injected radioactive titanium bead to mark the lump.

Still no word on what it was. Then followed two weeks of PET scans, CAT scans, bone scans, an EEG, EKG and so many blood draws they couldn’t find veins any more.

Again, there was still no word on what it might be, although I suspected breast cancer because I’d read brochures from women’s clinics, and was vaguely aware men could get breast cancer too. I was finally told l had breast cancer, and was scheduled for surgery on April 1, 2016. I guess I was lucky in a way, there wasn’t a long time to stew and worry.

On the last day of March I went into Via Christie Clinic on Murdock, a women’s clinic, for my sentinel node injection. I was directed to a small lead-lined room with five women. One went to an odd refrigerator-sized box and got out a strange looking thing, jabbed me in my breast with never failing accuracy, and hit a major nerve bundle. I am ashamed to admit I came out with quite a lot of profanity before inquiring what they were doing to me. She explained that the radioactive marker they injected was to track where the cancer might have traveled if it had spread. There followed three more injections, also not very comfortable. I decided the other four women in the room were there to hold me down in case I jumped off the table and started to tear the place down!

The day of my surgery I arrived early for my unilateral mastectomy. I was sedated and went out like a light. I woke up later in the recovery room with my wife, son, and daughter by my side. I felt around and found nothing where my left breast had been. I had no pain and it felt like a shoe sole there. Two plastic drain tubes were sticking out under my arm with squeeze balls attached at the end. The next day I was sent home with all the instructions needed. The final analysis was stage IV invasive ductal carcinoma at the age of 69.

I made the mistake of looking up stage IV breast cancer on Google, and soon found the doom and gloom stuff.  I took the month of April off from my job at Spirit AeroSystems in Wichita, KS on FMLA temporary disability, and had nothing to do except worry about what I had read. Things went real dark for a bit, I even (I’m also ashamed to admit) considered doing away with myself. While sitting in the basement watching TV, my daughter, Marilyn, came downstairs and said, “Daddy, Mom’s going to kill me.” I said, “No she’s not, why would she kill you?” She said, “I’m pregnant.” The darkness around me disappeared, we were going to have our first grandchild! I asked her why, since she was married for four years, had a teaching job, a house, and a husband with a job, why would Mom kill her? Of course she didn’t!

On May 1st I went back to work. The drains were still in, but not giving me too much trouble. I started warning all the guys to get checked for breast cancer. I saw a local story on KAKE TV called “Buddy Check 10” talking about breast cancer, but they didn’t mention anything about men also getting breast cancer. I called the station to inform them guys get breast cancer too, and they invited me in for an interview.

In the middle of June, my incision started seeping and my kidneys went bad on me. I was back in the hospital and needed another month-and-a-half off from work. My wife went with me to my surgeon to learn how to change the surgical packing in my chest. Every day, she’d pull out the old surgical packing, clean me up and put in another one.

I went back to work and haven’t been hospitalized again since. I can’t thank my family enough, Luisa my wife, Danny my son, and Marilyn for all the dragging me to appointments, and nagging me to remember all of my appointments. All this while I was probably acting like a grumpy old bear with a toothache. I did have a genetic test done before the surgery to find out if I could pass breast cancer on to my two kids. I was negative for any BRCA mutations.

It’s almost year now, and the bone scans all show the cancer receding. While it had spread to a rib and the base of my spine, the markers in my blood are down. I also got good news from my diabetes doctor, my A1C is down. There was also good news from my heart doctor about my congestive heart failure. The echocardiogram shows my heart looks to be getting better too. Thank God, but I STILL HATE CANCER!