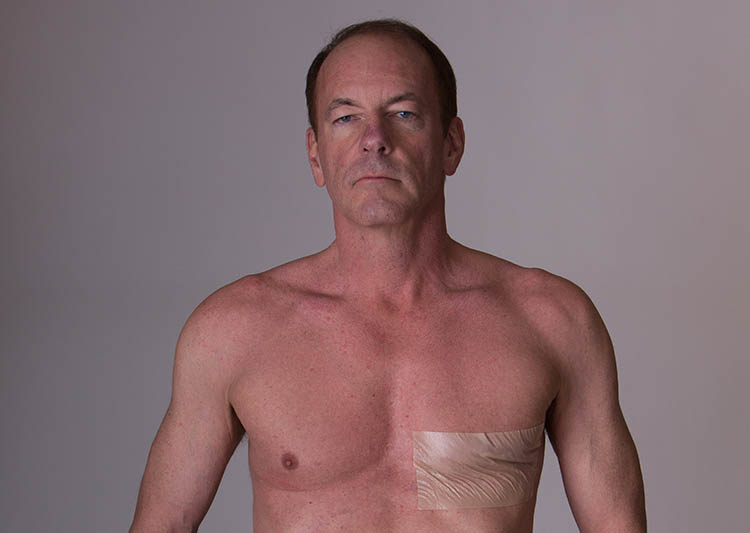 I consider myself extremely lucky at this point and I’m appreciative and grateful for every day that is granted to me now.

At 58 years old I found a lump in my breast and in September 2015 was diagnosed with breast cancer, Stage 2 “Infiltrating Ductal Carcinoma” to be exact. I refused chemo prior to surgery and had a mastectomy with the first phase of reconstructive surgery on Oct 12th, 2015.

My lump was pretty obvious. It was just under the surface of my breast. I knew the lump was something I never had before, but it never crossed my mind in could be cancer.  Many of my friends told me they had similar lumps that just went away, but I knew I had to be checked.

When the doctor called and said the lump was positive for carcinoma, I said, “Really, are you serious? Aren’t I too old for a man to have breast cancer?” I told the doctor I wanted a second opinion and she told me two pathologists had already been consulted.

Surgery kept me on the table for four and a half hours. Half the time was spent getting the cancer out, the other half was the first phase of reconstruction. Going into surgery there were many unanswered questions. What would they find? Would I lose my nipple? When I woke up it was the worst moment of my life. I was in agony and in so much pain because I was under medicated. From the expression on my surgeon’s face I knew I wasn’t going to like what I was about to hear. The lump and lymph nodes were removed (two were cancerous). I lost my nipple. I don’t even remember any other moment in my life with such negative energy.

In search of more information, I took my entire file and received the opinions of ten different doctors including my oncologist at UCLA. Nine of them (including my oncologist) were adamant that I do chemo immediately. One doctor recommended alternative medicine instead of chemo. I did my own research and consulted with many people I knew who were familiar with alternative medicine.

Given all this information my choice was clear to me. I chose alternative medicine.

My primary treatment is cannabis oil. Initially I learned about the cannabis oil when having chemo discussions. When I first learned I had cancer, I was injecting 4 cc’s per week. Now I inject 1cc per week for prevention since I’m free of cancer symptoms. The cannabis oil formula is specifically designed to kill cancer. Additionally, I’ve also had stem cell replacement, CVAC, high dosage vitamin C IV treatments and VitamiInfusion Therapy all with Dr. Darren Clair in Los Angeles.

Right now, I feel better than I ever have and I’m healthier than I’ve ever been because of the lifestyle and spiritual changes that cancer catalyzed in me. I gave up alcohol, cut back sugar, began eating all the right foods, and exercise regularly. I had a PET scan in November of which the results were that I had no visible signs of cancer anywhere in my body.

My breast reconstruction is a work in progress. Because I’m in good shape and don’t have enough fat, my doctor is going to do Voluma injections. Right now, we’re waiting for insurance to approval.

I have 10 brothers and sisters so genetic testing was something I was very concerned about.  My diagnosis could have impacted them all. Fortunately, I was negative for the faulty BRCA1 and BRCA2 mutations. We all stay in touch via a Facebook closed family group page where we all post updates about our lives. My breast cancer started conversations about family health history and we learned about other women who had breast cancer. No other men, so my diagnosis brought so much awareness to our family.

Cancer was probably the best thing that ever happened to me. It woke me up. It recharged me. It took me to another level of life. I’m more alive now than I’ve ever been. Without that jolt I would have never reached the insights I’ve discovered. I’m not taking anything for granted, especially when people tell me, “I’m so glad you beat cancer.” I know that’s not true because I’m now married to cancer.