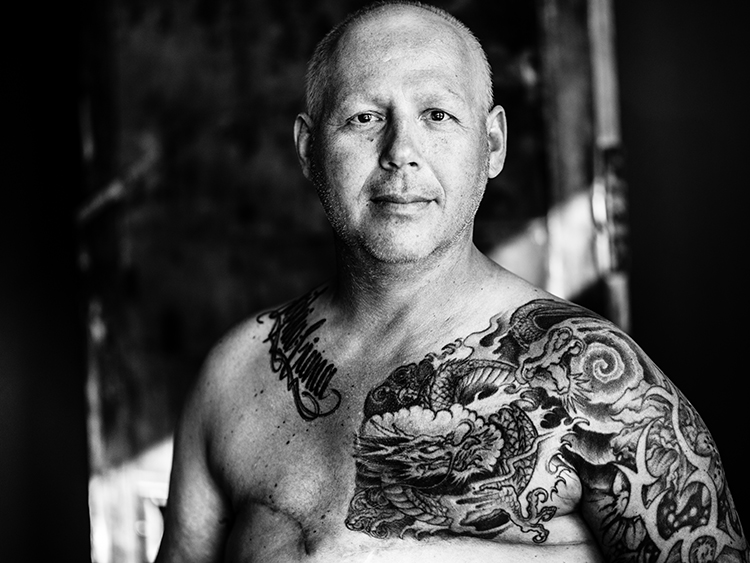 I originally felt a small lump behind my right nipple toward the end of 2013 at the age of 41.  I had my wife feel it and neither one of us were overly concerned because it was small.  I decided to keep an eye on it. Then in early March 2014, I felt it again and asked my wife to feel it again.  This time when she felt it she became alarmed enough to immediately make an appointment with my primary doctor. When I saw my doctor, he sent me directly for an ultrasound and mammogram.  The radiologist told me there was a good chance I had breast cancer, but we would have to wait for the results. Three days later I had a three needle biopsies.

I had been mentally preparing myself for whatever news was about to come.  On March 13, 2014 I was officially told I had breast cancer. Talk about a shock!! Even though I had been planning to hear those words in my head, it was surreal.

Wanting to get as many opinions as we could, my wife immediately set up four consultations with oncologists. We had three appointments at home in Florida within a two week span, then the fourth in New Jersey with an oncologist my family knew.

After three needle biopsies, I was diagnosed with estrogen receptor positive breast cancer (ER+) and also tested positive for the BRCA gene mutation. I decided to have a double mastectomy at Moffitt Cancer Center in Tampa, Florida the following month.  During surgery, one lymph node from my right side came back positive for cancer and the surgeon removed about 20 nodes from my right side and a few from my left (as a precaution). I was discharged with drains coming out of my chest to remove excess fluid from the surgery.

On May 6, 2014 I was told only two nodes tested positive for cancer and the amounts of cancer detected were very minimal. In June I began chemo treatments every two weeks until October 2014.  After two weeks off, radiation treatments began five times a week for six weeks. All my treatments ended just before Christmas.

In February of 2015 I was able to return to light duty in the police department, but not on the streets.  I am not able to run, have regular pain in my right arm where the lymph nodes were removed, and don’t have the ability to perform the roles needed of a patrolman.

As you can see in my photo, I like my ink.  My chest and arm tattoos were done before my breast cancer, except for one that I got afterwards on my firearm.  My surgeon was amazing! Without any prior discussion, he took it upon himself to take extra care in saving my tattoos during surgery, and so far I haven’t covered up my scars. My thoughts right now are to avoid trauma to that area so as to not trigger lymphedema.

Physical therapy keeps me busy twice a week.  I‘m trying to regain my upper body and arm strength and build up some overall endurance. There’s also therapy on the scar tissue from radiation, but it’s slow moving due to the risk of lymphedema.  Gaining weight from the treatments has not been pleasant either and it’s hard to shed the extra pounds.  I’ve changed my diet to include more vegetables and beans and stay away from animal fats and processed foods.  I also find the lingering effects of the chemo, like stomach problems and constant fatigue, leave me with little energy.

The love and support I have been shown has been unbelievable! A fundraiser was organized on my behalf to help pay for the mounting medical expenses and a donation website was set up by amazing friends for my family and me. We have health insurance, but knew we were going to be receiving bills that insurance wouldn’t cover. Between the prescriptions, copays, the balance of the mastectomy, biopsies, chemo and radiation, the bills keep piling up. The generosity and love people have shown to us has been non-stop.

Life is good! My advice to other men going through this process would be to remember they are not the first and there is support out there and just stay strong!

Anyone who might be going through this, KNOW- YOU WILL WIN, YOU WILL BEAT THIS AND YOU WILL SURVIVE … Mind over matter!!!!  All will be good.  I am so very blessed to be at this end of the journey.