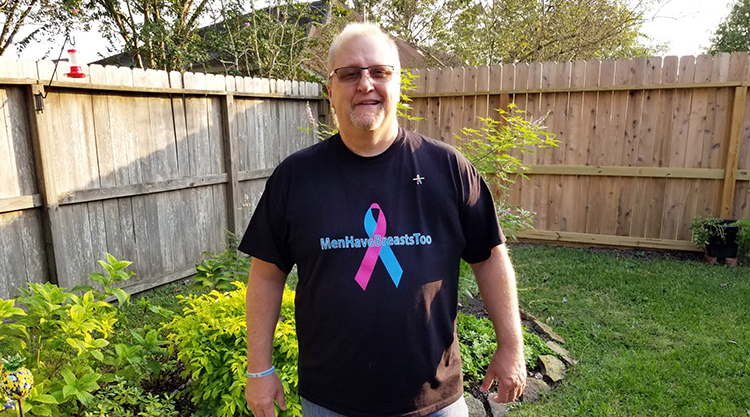 I am 55-year-old white male married 35 years with two children and two grandchildren. One day in September 2019, I was in the shower shaving and felt something on my left breast right below my areola. When I got out, I asked my wife to feel this and give me her opinion. After she felt it, she said I had a lump and need to go to my doctor.

I made an appointment and went to visit him for a check which he said probably just a lipoma or fat deposit and said he would order an ultrasound. I left his office and went across the street to the imaging center where they told me he filled out the orders wrong and I would have to go back and get it changed. Irritated, and just feeling uneasy, I called my wife’s breast specialist Dr. Dixie Melillo, who happens to be one of the co-founders of The Rose in Houston, TX. She made an appointment for me on September 27th at her office and she did a thorough exam of my breasts and lymph nodes. She said I needed a mammogram and ultrasound and got me into The Rose on October 3rd. Had my tests and she also looked at ultrasound onsite and said I needed a biopsy which was scheduled for October 8th. It seemed like forever after the biopsy. I waited the longest three days ever, and on Friday, October 11th, her receptionist called me and asked us to come in that day at 2pm. Now I was really scared and worried.

My wife and I went to meet with Dr. Melillo and she informed me I had invasive ductal carcinoma grade 2 (stage 2) breast cancer. She told us that her people were going to take care of us and set us up with a surgeon at MD Anderson Cancer Center. The helpers at The Rose are fantastic. They explained every option and what to expect along with helpful pamphlets with all sorts of resources. Three hours later, MDA was calling me to schedule an appointment the following week with oncology. We met October 18th where I had another thorough exam and more tests were ordered, including genetic, mammogram, ultrasound, X-ray and blood tests. On October 23rd, during my ultrasound, they noticed three lymph nodes that were not right and immediately conducted a needle biopsy of them. The following day the oncologist called me to inform me that all three where normal, and so far it looked as if the cancer is still just in the breast tissue.

On October 30th I had a consultation with a genetic counsellor, and we scheduled genetic testing for any gene mutations. On another note, my father’s two sisters had breast cancer and two of his brothers had prostate and colon cancer. My mom’s sister had breast cancer as well, so if I had a mutation, then all of my siblings and kids and grandchildren may get tested for gene mutations. Test results came back negative for any mutations. How did I get Breast Cancer?

On October 31st we had a visit with the surgeon, and my wife and I talked in great length about all the options and outcomes of surgery. I had originally planned on removing both breasts before the meeting, but felt more confident with just having a single mastectomy, scheduled for November 20th. The surgery went well and I stayed one night for observation in the hospital. The doctor came in and told me he removed my breast and two lymph nodes on the left side, and all were sent to labs for testing even for a ONCO test of the tumor. We went home and I had a drain tube on my left side and my wife took excellent care of me while I healed. We returned to the surgeon about a week later and he said that the cancer had not spread to my lymph nodes or the surrounding tissues of my breast, which is great news but I still needed to speak with the oncologist.

We met again with the oncologist and she explained the ONCO test and how it measures the likelihood of recurrence of the cancer and that she would use this to determine my path forward. The results of the ONCO test showed pretty high and that chemotherapy would be the best course of treatment. She said I would need the highest dose of chemo they give, but it would bring down the reoccurrence to the 12% range. Now I’m a odds player and that seemed like good odds to me. So, 2020 started off with a bang and my wife and I running. On January 8th, 2020 surgery was scheduled to install my port for chemotherapy.

On January 9th my fist infusion of chemo which was AC or more commonly known as the Red Devil for its red color and high strength. At this point I was scared, but my strength came from my wife who was by my side the entire process and kept my medications timely and everything I needed to help my stay comfortable. So, as it went, I had four rounds of Red Devil, one every three weeks and after round two, my hair was just about gone. On April 13th, 2020, I started the second round of chemo which had 12 doses, one dose a week for 12 weeks. This was worse on my body then the Red devil, but I finished on June 22, 2020, had the port removed and started my five years of hormone therapy medication.

Even before all this I have always been a big supporter of breast cancer awareness for The Rose and Susan G Komen. Even the ZETA TAU ALPHA sorority at UH, my daughter joined, is all about breast cancer. When I was diagnosed, I started doing research and found HIS Breast Cancer Awareness and all the useful information about male breast cancer. I ordered awareness lapel pins and bracelets from HIS and have begun informing my co-workers about the possibility of breast cancer in men and its recent discovery in my breast.

During the Lyondellbasell HRO United Way Campaign, in October 2019, I got up and spoke about my newly found Male Breast Cancer. It’s hard to get up in front of 100 plus co-workers and tell them your most private stuff, but I felt I must make the effort to ensure men were aware of male breast cancer and the fact that it is not just a woman’s disease. I also was invited to speak at another plant during their campaign, and it was so positively received that contributions were higher than ever before. Since I started talking about it in the plant where I work, two employees have asked for my doctor’s number because they felt something.

I know this is long, but I really just wanted to say thanks and let’s try and make more men aware. I even had a special LED lighted sign made for Dr. Dixie Melillo and The Rose. 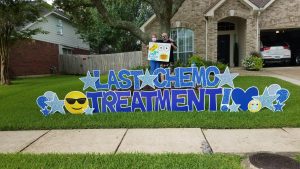 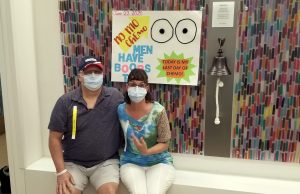 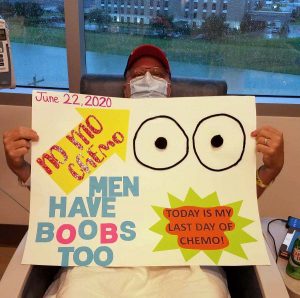 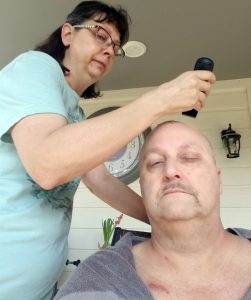