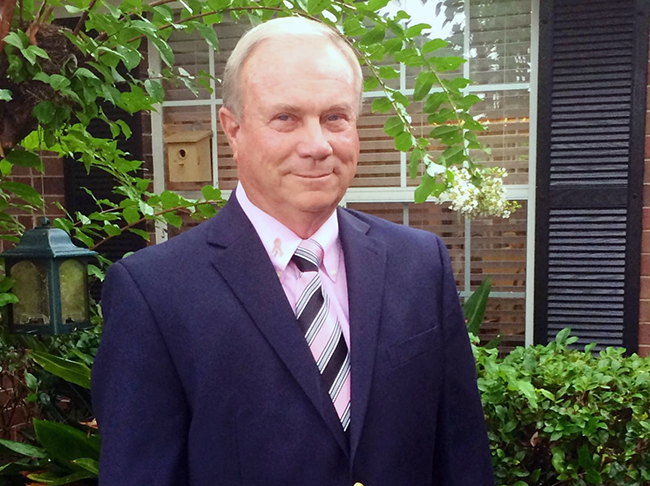 Imagine celebrating a birthday on January 1st, being diagnosed with male breast cancer on January 3rd and having your breast removed on January 17th. I don’t have to imagine, because it happened to me in 2012.

Initially, my doctor told me the lump next to my right breast was nothing to worry about. If you have a lump and your doctor tells you not to worry, that’s when you worry. That’s also when you go see another doctor. We men go to the same doctors for years and we take for granted they know everything. They don’t.

After surviving two heart attacks, I knew something was wrong with my body. You know your body better than anyone. My persistence led to a breast cancer diagnosis. It was Stage 1. I had a mastectomy, but thankfully didn’t need chemo or radiation. I’m on tamoxifen now and the doctors have told me there’s a 15% chance my breast cancer could come back.

The doctors hardly ever, ever check us men from the waste up. Now my doctors are checking up under my arms, back and chest. I want other men to learn from my experience and I’ve made it my mission to raise male breast cancer awareness. Too many men feel alone, but I feel like I am making some progress with my efforts. Patients are starting to become aware. We need to let it be known that men can have breast cancer just like women.

All the images out there about breast cancer shouldn’t  just be of women. Have a man standing side by side with a woman in the pictures. We need the exposure.

We need to grab hold of those skirt tails. Breast cancer in men has been a disease known for years, but nobody’s ever talked about it. I’m very passionate about getting the word out there and I won’t let anyone discourage me.

I’ve walked in fashion shows and speak often about the importance of early detection and breast self examinations. Last month I organized a charity basketball game that was so successful, it will now be an annual fundraiser.

The governor of Georgia is about to sign a bill I proposed declaring June to be Men’s Breast/Prostate Awareness month. My destiny wasn’t for me to make millions, it’s for me to save millions. I hope my legacy will be that I have saved millions of men’s lives.

Name one fundraiser in October for men. That’s going to change this year, I promise you!