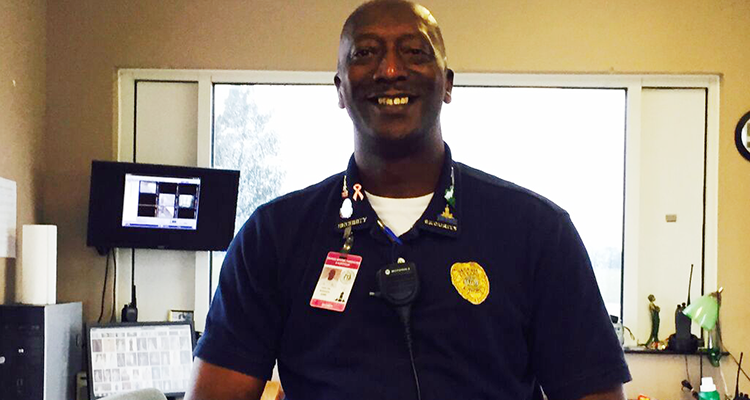 I never would have thought in a million years that a man could get breast cancer.

Always an avid believer in keeping myself in tip top physical shape, I spent a lot of my free time toning my physique at the gym. All that and my whole world changed in October 2012.

While watching my wife do her self-breast exam, I decided to do one on myself just for fun.  What I found was a bump the size of a mosquito bite behind the nipple on my right breast.  Looking a little closer I also noticed that my right nipple was swollen, discolored, scaly and tilting a bit.  I immediately went to the ER at the Midtown Medical Center a few minutes from my house.  After being checked out, I was referred to my primary physician for further evaluation. The next day my doctor referred me to Dr. Andrew Pippas at the John B. Amos Cancer Center.

A mammogram was followed by removal of tissue samples from various areas right around my nipple, which hurt like anything. No sedation, they didn’t give me a thing.  When I was told I had a malignant tumor in my breast, I remember thinking, “Breast Cancer?” “But I’m a man!”

When asked about my family health history, I explained my father had prostate cancer and he had lost approximately 17 members of his family to breast cancer including sisters, brothers and nieces. It was obvious that I needed to be tested for the BRCA gene mutation and I am BRCA2 positive. I immediately told my children and urged them to be tested.  Thank god my two daughters and two sons are negative. This left me breathing a sigh of relief for my 25 grandchildren.

My siblings were also tested, with the exception of my brother who feels as though he is invincible.  He has a knot in his throat that has affected his ability to carry on a long conversation, but he refuses to have it checked. I guess he is afraid of what he might hear.  As a result of the testing my two sisters have each had one breast removed and one of my nieces has undergone a double mastectomy and a hysterectomy.

The feeling of embarrassment was overwhelming to me when I sat in the doctor’s office waiting to be called in for my appointment with the breast surgeon.  As I looked around the room, I was the only man sitting there.  I was alone and felt as if everyone was looking at me and wanted to know where was my wife was. I couldn’t wait for my name to be called, so that everyone would stop staring at me.

A few days later, my right breast was removed along with 14 lymph nodes.  As someone who’s used to a regular work out routine, it was important to me to get right back to exercising. Thinking I felt good enough to work out a little, I found out quickly that you always need to listen to your doctor when they tell you to take it easy.  I busted my stitches wide open, which lead to me having a gaping whole in my chest for two weeks that was allowing fluid to be released.  After being stitched up for the second time my chest felt tight like I was stitched tighter.  I was given a sleeve and glove to wear to keep the swelling down in my right arm from the lymphedema.

What followed was six months of chemotherapy with two different type of chemos as the first round was not strong enough.  As a result of the chemo, my heart was weakened significantly and now I also have a cardiologist on my team.  My appetite was gone, I lost quite a bit of weight, which at 6 feet tall was quite noticeable, and I’ve slowly been able to put some of the pounds back on. If that wasn’t bad enough the Tamoxifen gave me such bad sweats, I would drench the sheets at night and my clothes during the day.  I also underwent GAMA radiation.

Always being a church going man, I stayed away from church during my diagnosis and recovery.  When I returned I found the need to tell the congregation about my recent ordeal.  The overwhelming support I received was amazing.  In fact they pinned up a news article that had been written about me on the Church bulletin board. I felt like a celebrity!

I returned to work at the National Fairgrounds about a year after my surgery.  Working has helped me with my recovery and gives me an opportunity to speak with people regularly about my breast cancer.  They can’t believe I look so good, and I attribute that to being in such great shape for so many years.  My life has changed since breast cancer stopped by for a visit.  I am glad to say I am three years cancer free and feel as if I knocked cancer out.

I have a check-up coming soon and will see what can be done about the scar tissue on my chest.  All in all my life is good. I am working and thank god every day that I beat this disease.