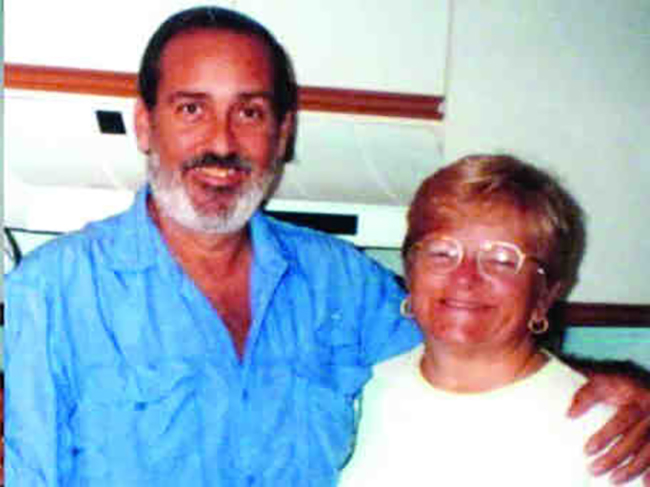 Brock and I were in Aspen, CO for a wedding in November 2001 when Brock found a lump in his right breast.  Brock waited to tell me about the lump until we returned home after the wedding. He was also having pain in his spine and two of his ribs, so he decided to see his doctor to get an x-ray of his back. His main concern was trying to find out whether he had arthritis in his spine, but he casually mentioned the lump in his breast to the receptionist.  He was immediately taken in to see the doctor and the next day Brock went for a mammogram. I didn’t go with him because he felt it was no big deal. Two days before Christmas we got the news Brock had breast cancer.

At the time, I didn’t think much about it.  Brock had it and we focused on what needed to be done to get him better.  I thought everybody knew about male breast cancer, but us.

In January 2002, Brock had a radical mastectomy with 13 lymph nodes removed. The cancer was in all 13, and later we found out it had spread to 33 lymph nodes.  A few months later Brock was operated on to get a port for the chemo.  The doctor came out to me and just shook his head, telling me it didn’t look good. I turned to him and said, “I believe in miracles.”

Things were going pretty well with chemotherapy and radiation for the first year and a half. We did a lot of traveling at that time. It was great, you would never have known Brock was so sick.

Then came the day in July 2004 when the doctor told us there was nothing more he could do and he felt Brock should begin hospice care. I still was praying for a miracle.

On September 16, 2004, Brock lost his battle with breast cancer at the age of 59 and 19 days. The cancer had spread to his lungs, hips, spine, ribs and up into his brain.

A few days before Brock died, I asked God: “Why Brock? I know Lord I am not to ask why, but I just had to ask. Lord I really don’t want an answer, but I hope someday I will get my answer.”

Then there were the breast cancer organizations and people on breast cancer sites who gave me the, “More women get breast cancer than men, get over it” speech. I guess the pain I felt wasn’t as important as the pain a woman’s loved ones felt.

In one article written about Brock, I was asked what was the lesson I learned. I tell women to find a way to let all the men in their lives know about male breast cancer. Don’t stop talking to them until they go and get checked. Help them learn about breast self exams. It could save their life.

While speaking to women about breast cancer in men, I have met some ladies with breast cancer themselves. I’ll ask them if they have sons and if their own doctors advise the boys to be checked too. The doctors do not. This must change too.

People are surprised to know a father who gets breast cancer can also pass on the genetic mutation to his children just like a mom. When my stepson Adam initially looked into genetic testing, he was told the cost would be $5000. Now the tests are more accessible and affordable, so perhaps he will reconsider BRCA screening.

Adam has been very supportive of my mission to keep raising awareness of breast cancer in men. He designed a sticker for me as a birthday present.

I got tired of just seeing the pink ribbon and came up with making a ribbon out of clay and adding the words “MEN, TOO” so people would get the word

our about MALE BREAST CANCER. I hand make each ribbon, then add the pins on. Whoever receives my free clay ribbons will help pass word on and hopefully save someone’s life.

In 2015 my friend Verna, owner of Verna’s FlightLine restaurant where Brock and I met, sent me a picture of Mike Trout, the Los Angeles Angels centerfielder, and his buddy Ron Tobolski (Verna’s future son-in-law). They were wearing the clay ribbons with the words “MEN, TOO” on it!  Like us, Mike’s a South Jersey guy. He’s also an MLB MVP and has allowed me to use the picture to help spread awareness.

Last year I also wrote a letter to NASCAR and the Sprint Cup series with race dates in October. I got a call from Charlotte Motor Speedway asking if I would like to come up to help paint the pink wall. I said I would be happy to, but never got a call back. I think it’s because I asked if they would add some blue and let people know MEN GET BREAST CANCER, TOO.

This year I contacted Martin Truex, Jr.’s Foundation. They were great. They put a picture of our sticker and mentioned MALE BREAST CANCER on their Facebook page:

“Childhood and Ovarian Cancer is our mission. But October is Breast Cancer Awareness month. 2,600 cases of men getting breast cancer will occur this year…. small number, but equally devastating…”

I will continue to let everyone know men get breast cancer too. The pink stigma of this disease needs to end. We must stop this gender bias of pink.