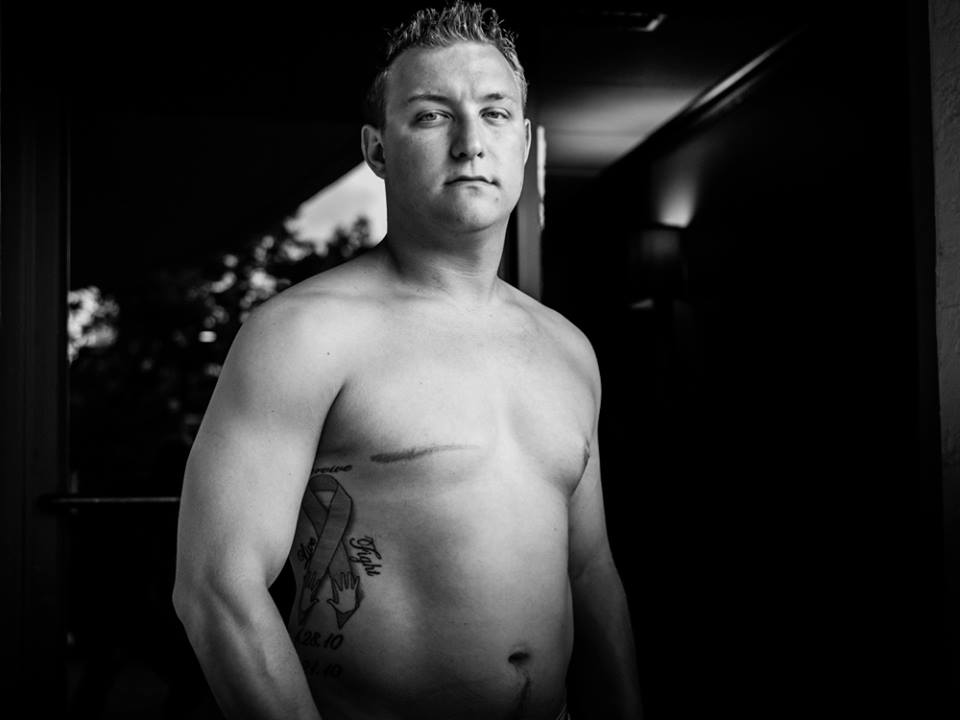 “Don’t take life too seriously. You’ll never get out of it alive.” ~ Elbert Hubbard

In April 2003, I was a typical 17-year-old guy. A senior in high school, on the football team, working at the pool and ice rink, everything was cool. There was something a little unusual though. One day I scratched my chest and felt a lump behind my right nipple.  We had no medical insurance at the time, so at a school physical night, I asked two doctors to check out the lump.  Neither doctor was concerned.   All they said was “let’s keep an eye on this…it’s a calcium build up…you’re becoming a man…it would go away.”  Well, that never happened.

Seven years later, after graduating from college, I got a job working at the same pool and ice rink where I worked while in high school. When I was promoted to manager and qualified for health insurance, I made an appointment for a check up. During the exam, the doctor never checked my breasts, so I asked him specifically to look at the lump. He immediately suggested I go for a sonogram, but he didn’t think there was anything to be concerned about.  The doctor who read the sonogram suggested I also have a mammogram.   On April 27th, 2010 my lump was removed.

None of the doctors seemed concerned, so I still didn’t think anything could be wrong.  I thought since lump was gone, I was all good.

The very next day, I was in the parking lot of the country club about to head home to my second job when my cell rang. It was the doctor and he told me I had breast cancer.  He just blurted out the words and said he’d call back in a few days after looking more closely at the pathology report. Gee, thanks doc, leave me hanging there for a few days. I thought I was getting punk’d and Ashton Kutcher was going to come out from in between the cars with cameras or something.  No one called me right back, so I realized this was no joke.

The first thing I did was call my dad to give him the shocking news, but asked him not to tell mom yet. I was going to work, couldn’t talk much and said we’ll discuss everything more when I get home. That didn’t last long.  Less than five minutes later mamma bear calls and asks about 1,000 questions in 30 seconds.

Like most people my age, I posted my breast cancer news on Facebook.  I wrote about my diagnosis, upcoming surgery and chemo plans.  It was the easiest way to let my friends know without having to tell them face-to-face.

On May 18th, 2010 I had a mastectomy to ensure the likelihood that my new friend would not return. This was a terrifying experience, but having my loved ones supporting me in the waiting room was the only way to get through it.

Along with breast tissue, my nipple and four lymph nodes around the nipple were removed.  Because of my scar, everyone says it looks like I am winking at them ( – )(  ).

After a quick and successful surgery, I was given very good news.  With the margins taken out all the cancer was gone! The cancer was caught very early and was classified as Stage 1.

Following the mastectomy I went through four rounds of chemotherapy and am free & clear of cancer for good, I hope!!

Originally, there were no plans for chemo. Because the lump was small, classified as stage 1, and nothing had spread, chemo was not required, but was an option. My doctors told me about a new test called OncoType DX that breaks down the tumor on a genomic level. The test would help the doctors determine if I needed chemo and what type, and would also let me know the odds of my cancer coming back within a 10 year span. The results showed that I would benefit from chemotherapy, had a 22% chance of cancer, of any sort, coming back and that doing chemotherapy could possibly drop those chances by 10%.  I said, “YES” without any hesitation. What are four rounds of chemo that might be painful for several months, but could potentially erase the chances of cancer coming back? I want to live a long full life with no more interruptions! People asked, “Are you worried about losing your hair?” my reaction, “Really?!” I just lost a nipple my hair will grow back.

My breast cancer was 88% estrogen based and I was prescribed Tamoxifen. The side effects were awful, I didn’t realize it at first but I was moody, having hot flashes and was not pleasant to be around. After six weeks, I was taken off the Tamoxifen.  Right now, I’m taking Anastrozole daily.

My mission now is to spread the word to everyone, men & women, young & old, that breast cancer does not discriminate, it can happen to anyone at any age and to MEN too!

On May 19, 2010, I started  Bret Miller 1T Foundation MBCC Inc. with the help of my parents Peggy & Bob Miller. Only 1 T in my name and now 1 Tit and 1 Nip for those keeping track (have to have some humor every now n’ then). The goal of the foundation is to raise awareness in colleges and high schools telling our youth that breast cancer can happen to anyone!  Male breast cancer survivors share their journeys and let students know they are their own best advocates for their bodies.  We tell people if they find something that doesn’t feel right they must talk with a doctor, don’t ignore anything. If you don’t like the answer given to you, get a second, third or fourth opinion. Don’t rest until you get the answers you want. Early detection is the first step in the fight against breast cancer!

In 2014,  we created the Male Breast Cancer Coalition. Our goal is for no man to ever feel alone when he hears the words “you have breast cancer.”

Now we are also making a documentary about male breast cancer. “Men Have Breasts Too” will share stories from men who are members of what is usually a women’s only club, hear from family members impacted by male breast cancer, understand more about the disease from doctors and help spread awareness that men can indeed get breast cancer too.  We’d like our documentary to ignite a serious discussion about detection and education for men with breast cancer.

Since my diagnosis, I have always been open to talking about my breast cancer. This is something I think was meant to happen to me, so that I could help others.

Please help raise awareness and go to www.checkthem.org. Without your help men won’t know what symptoms to look for and some won’t be as lucky as me. About 450 men a year die from breast cancer and early detection can help.

My goal and mission in life now is to spread the word to EVERYONE that men can get breast cancer TOO!!  Men and women need to start checking themselves at a younger age because breast cancer is becoming more and more common in younger people. Remember, MEN HAVE BREASTS TOO.

I never thought it was possible for a man to get a woman’s disease, but I know now that’s not true.  I have 13 women cousin’s with family history of breast cancer, had the BRCA genetic testing, do not have any mutations and my prognosis is great. I am cancer free.  On April 28th, 2021 I celebrated my 11 th.  year of Thrivership.

“Saving Second Base One Boob at a Time”

Building AWARENESS and Early Detection for the Young Women and Men.

Knowing Your Body and talking about concerns.

Through the knowledge of SURVIVORS!!