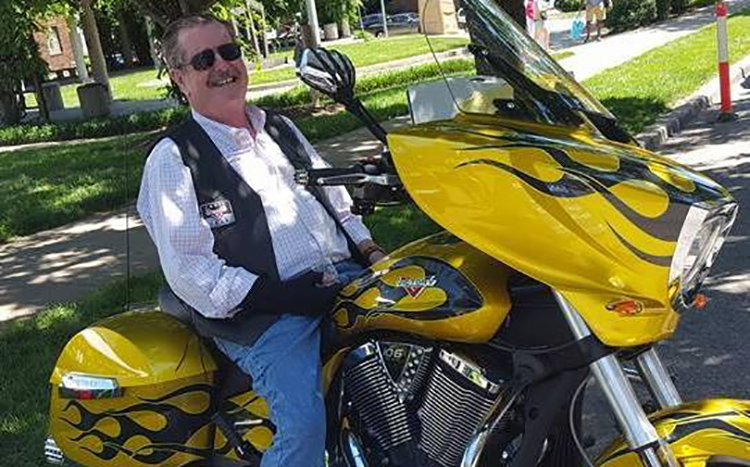 Journey, what journey? This has been more like a trip to hell and back.

In 1995 I felt something right under my right nipple, so the next time I had a physical I showed it to the doctor.  He thought it was just scar tissue from an accident when I was run over by a small flatbed while in the Marines. The doctor said we would just keep an eye on it, and we did. Within a 3-year period my nipple became hard.

In 1999 after spending the day at a trade show for work, a group of us decided we would grab dinner.  As I started to undress for a shower, I noticed blood on my t-shirt.  My nipple was bleeding and a 3-inch area around my nipple was hot to the touch. I called my wife immediately and told her to set up a doctor’s appointment for me because I needed to see him as soon as I got back in town.

The doctor sent me for a sonogram and mammogram.  My appointment was the very next day and I had no idea what to expect.  I walked into a room full of women and that’s when I started thinking something was really wrong. The mammogram hurt like hell, I hated it.  I was squeezed into the machine, it was pulling on my chest, and I was sore and bleeding.  Then the nurse took me to a different room. I got up on the table, again not knowing what was about to happen. I told the nurse my chest hurt and wanted to know what she was going to do since I had never had a sonogram before.  She told me the bad part was over. I had watched them do a sonogram on my wife when she was pregnant, so I kind of knew what was happening.  She stopped right in the middle of the test and said, “Don’t move I am going to get the doctor.”  When the doctor came in looked at the screen, he didn’t say anything.  When I asked him what was wrong, he said he didn’t like the look of a particular spot and wanted me to see another doctor.  Three days later I was at the surgeon’s office, and again I was in a room filled with women. I was alone and everyone looked at me like I was in the wrong place.  I was told the surgeon was one of the best breast men in the area.

The doctor walked, looked at my breast, looked at the test and said, “Bob it’s like this. I can check you into the hospital and put you under and take a BIOPSY, or we can do it right now under a local.” I told him to just do it now. So he took the first plug of skin, which was nice and pink, but the next four were black as coal. The conversation went downhill from there.  My doctor said,  “Bob I can send this out to be tested, but I know what it is, it’s not good and needs to come out– yesterday.” Then I heard the words “breast cancer” for the first time.  I went numb and didn’t say much at all.

At the age of 45 I learned I had Stage 2 breast cancer.  In November I underwent a mastectomy of my right breast followed by chemotherapy with Adriamycin (more commonly known as “The Red Devil”).  Thinking I could shrug this all off and act like nothing had happened to me, I soon found out I couldn’t have been more wrong.

The word cancer changed my life forever.  I returned to work in January of 2000 and found I was constantly being asked by people if I felt okay.  In 2001, as I continued to feel worse, I swore I had felt another lump on my right side getting bigger. I told my boss and my wife, but everyone just told me it was in my head.

As my life spiraled downward, I lost my job, couldn’t  find work with my health record.  I was black listed by my company AZKO Nobel. My wife and I were living off my 401K at the time. When the money ran out, I had to start using the VA for my care.  I asked the VA several times to take a biopsy of the new lump. Again I was told it was in my head. They told me I had a mental problem and wanted to put me on drugs!! Yes I was getting angrier.  The more I asked for help, the more people turned against me. My marriage was going downhill fast and I ended up in jail for 82 days. When it was all over a judge let me go with nothing more than probation. No real charges other than an argument with my soon to be ex-wife over money and what we were going to do next.

While I was in jail the bank took the house and my wife’s car. I had filed for my Social Security Disability when this all started, and when I was let out of jail I learned the SSD was approved.  I got my own place and filed for divorce.  While all of this was going, I was still asking the VA for help with the lump under my right arm.

One day after playing with my grandson on the bed, he jumped and I hit my right arm on the wall.  The next morning my arm started swelling.   With no other health care options, I went back to the VA.   They treated me for Lymphedema, but I needed the doctors to pay attention to the lump. The only way I could get in to see a doctor again a few days later was to get an appointment for a colonoscopy.  Well, I tricked them and finally got the doctor to do a biopsy. The next day I learned I had HER2+ breast cancer, very advanced cancer.

In 2005 I had a recurrence of breast cancer and was put on more chemotherapy, this time it was Herceptin every 3 weeks and Tamoxifen daily.  It wasn’t until 2006 when I underwent surgery again, this time to remove the tumor that continued to grow on my right side.  By this time, the tumor had wrapped itself around my rib.  My surgeon didn’t want to cut the ribs out to remove the entire tumor, so a small piece of the tumor was left behind.  I was treated with radiation to try and kill the last remaining cancer. The tumor had not grown, but it is still there and was watched with CAT scans every 3 months.  In 2014 I had a spot on my right lung, a biopsy was performed, and again there was cancer.

At that time I was taken off of the Herceptin and Tamoxifen and started on Kadcyla every three weeks.  My body rejected the Kadcyla, so I was put back on Herceptin every three weeks for the rest of my life. With HER2 breast cancer, I will never hear the word remission.

The side effects of this cancer have been daunting.  Besides the scar tissue on my lungs from a fungal infection and pneumonia, I lost my voice in 2014 because the radiation paralyzed one of my vocal cords.  Now I also have an active tumor in my left lung.  My cancer is still in my body.

As hard as I try to forget there is cancer in my body and live my life, the constant doctor visits makes that next to impossible.