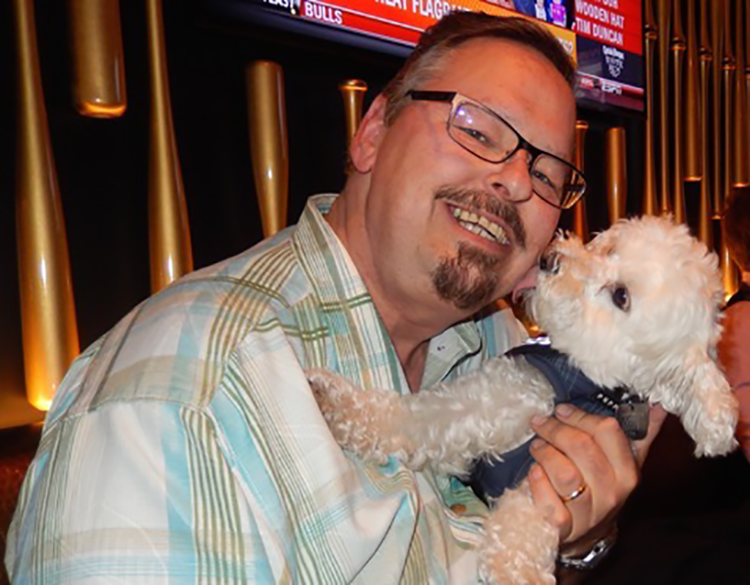 In 2001 I went to the doctor because I had a lump in my left breast. Although I knew it was unlikely for a man to get breast cancer, I was still relieved when the lump was found to be benign. I was diagnosed with Gynecomastia.

A year later I had intense pain in my clavicle. I went to the doctor and was diagnosed with a fracture. I had surgery and a biopsy on my clavicle. The biopsy was benign.

In January 2003, I had more pain in my clavicle which resulted in a second surgery and biopsy on my clavicle. I was diagnosed with metastatic male breast cancer, with metastasis to the bone. It was just a few days after my 41st birthday.

At the time of my diagnosis I had been with my girlfriend, Linda, eight years. I didn’t want her to have to go through this with me so I pushed her away. She didn’t give up on us. I married my wonderful wife on July 15, 2003 on a beautiful beach in Maui, Hawaii with our son and daughter standing up for us.

Over the past twelve years I have had many tests, scans, blood work, treatment and doctor’s appointments. The anxiety that goes with all of the testing can be overwhelming. At my oncology appointment in March 2012, I was diagnosed with a recurrence of cancer in my bones. I started on a treatment called Herceptin (Trastuzumab). While on this treatment you need to have regular heart scans. In 2014, mine showed my heart had weakened which then ended my treatment.

Right now, I am on what is called “a holiday” from treatment. For me, living with the chronic pain I have had since my diagnosis has been the hardest. I have neuropathy in my feet and legs. I also have some problems with my memory and comprehension, as well as ongoing nausea. I have been permanently disabled by my cancer. I haven’t worked since I was diagnosed.

One of the best decisions we ever made was the decision to get a service dog for me. Because of the neuropathy in my feet and legs, I needed assistance with stairs and elevation as well as picking up things I drop and cannot reach. We already had a dog named Bailey. During our research it was suggested we see if Bailey had the temperament to be trained as my service dog and he became my service dog three years ago.  He is my constant companion and helps me every day.

Living with metastatic male breast cancer for over twelve years, the best advice I can give is to never give up hope. There are days that I can’t get out of bed because I don’t feel well. But, I am thankful that I am still here and it is important that I don’t beat myself up for what I can and or can’t do for myself and others. My oncologist recently told me that I am his longest living patient with metastatic cancer and he doesn’t want me to break his record.