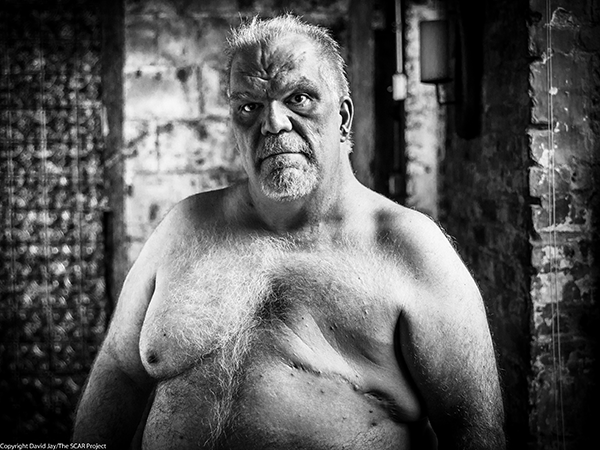 My update:
I’ve been tested for BRCA 1/2…both negative. I’ve had the Myraid MyRisk panel and that was all negative. My current diagnosis is Stage 4 metastatic male breast cancer with mets to my chest wall, 2nd rib, T1 and T12 vertebrae suspect, and a nodule in my right middle lung. I’m currently on Ibrance, Letrazole (Femara) and montly injections of Lupron and Xgeva. I’ve had 4 PET scans in a year and the all showed improvement.
I have a new secondary (2016) of prostate cancer at which my PSA was 7.7 with a gleason score of 3+3 or 6. The meds I’m currently on had dropped my PSA as low as 1.0, this past month it went back up to 1.37; which has me a little concerned. My original cancer diagnosis in 2012 was stage 3a.

I’m a middle aged gay male, living with my husband and life partner, Tony, in Connecticut. I was diagnosed in May 2012, at age 49, with stage IIIa male breast cancer.  Breast cancer is breast cancer–male or female.  As a man with breast cancer, I’m treated the same as a woman due to the lack of information and clinical studies on men with the disease.   It is barely mentioned in the news or literature.  It isn’t studied because there aren’t enough of us men with the disease out there in the world compared to women.  We can’t get into clinical research studies since they are written with a criteria “women of a certain age, etc.”  No place for men in those criteria.  It’s a sad state of affairs for us men.  Over 400 men a year die from breast cancer; it just isn’t caught early enough.  Each year over approximately 2,300 men get diagnosed.  But compared to women, that is a drop in the bucket.  So, men are basically treated with the same treatment protocols as women.

When I was diagnosed, I thought three things: one, I’m going to die, two, I’m going to be disfigured by a mastectomy and three, I need to tell everybody about male breast cancer. I was lucky to find a caring volunteer at the now defunct organization, Y-ME, who spent about 45 minutes on the phone with me after I got the call from my oncologist.  At the end of the call, she asked me what my plans were for the evening.  I thought she was crazy.  I wanted to say, “to sit here, cry and wallow in self pity.”   But, I didn’t.  I told her perhaps a movie or just sit on the deck.  She was reminding me that life goes on.  I needed to continue to live my life.  It was valuable information for me to take away from our conversation.

On June 13, 2012, I had a mastectomy, followed by six rounds of chemotherapy over 18 weeks, and 25 rounds of radiation. On January 1, 2013, I started a 10-year course of the drug Tamoxifen in the hopes of keeping the cancer cells at bay.  To fulfill my wish of telling everybody about male breast cancer I was able to begin working with a video production crew to produce a documentary about male breast cancer and my experiences with it. I met with the crew and they filmed my one-year mammogram and ultrasound.

Through my work with the documentary I met another man (Bill Becker) who was local to me and who also had the same stage cancer I did.   The trailer for the documentary is complete but a full documentary still needs to be produced. http://timeslikethesefilm.org/ During filming, with the producers tireless efforts, Bill Becker and I were able to reach out via the media including interviews on local TV news stations and TV magazine talk shows, as well as having a front-page story in the Republican American newspaper in Waterbury Connecticut about my experience with breast cancer and the documentary.

We were also interviewed by an NPR affiliate WSHU about the documentary and male breast cancer.  Bad news arrived.  Bill’s cancer had spread and he was now stage IV and although he fought a hard fight for about a year, he passed away on Sept 17, 2014 surrounded by his loving family.  We are continuing work on the documentary in his honor and to keep his memory alive.  We hope to release it by end of 2015 or early 2016.  We are also working on creation of a PSA spot for local media outlets.

I have no evidence of disease.  My recent mammogram and ultrasound were negative as was the physical exam by my breast surgeon, Dr. Beth Ann Sieling.