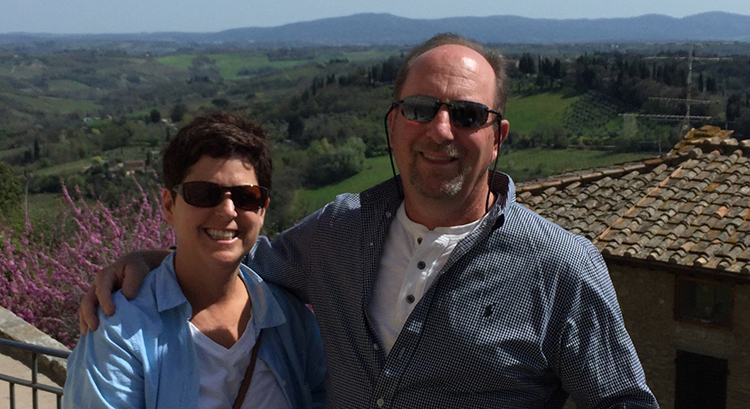 As a male diagnosed with breast cancer just over three years ago at the age of 60, I found it both difficult and challenging to accept.  I then found out shortly after my diagnosis that I tested positive for the BRCA2 gene mutation.  I knew I would need to learn as much as possible about my diagnosis, treatment and genetic mutation.

My story is probably not unlike most men diagnosed with breast cancer; however, my heart goes out to those diagnosed at a younger age.  I was fully aware men can and do get breast cancer, having had an acquaintance diagnosed with it over 20 years ago. But, I never thought it would happen to me.

As I mentioned earlier, I had a lot to learn.  First, I wish I knew what a cancer tumor felt like.  Had I known, I may not have waited three or four weeks before asking my wife Elana to feel the lump in my right breast.  Fortunately for me, Elana had recently spent several years working on the development side of a non-profit agency that specializes in helping anyone going through a breast cancer journey. After feeling my lump, she insisted I see my doctor as soon as possible.

The next day I made an appointment to see my doctor and began to realize my life was about to take a dramatic change.  The appointment led to a mammogram the following week, which was one of the worst experiences in all my 60 years.  I was sent to a women’s clinic designed exclusively for women, thus the name.  The receptionist was not very welcoming and thought my presence was somewhat of a joke when I told her I was there for my mammogram.  Then she saw my name was on her appointment list.  She asked me to have a seat in the waiting room and I told me I’d be called soon.  Upon entering the crowded room filled with women of all ages, I realized they were all staring at me as if I were completely naked.  I found a seat in the corner and began searching for a Sports Illustrated or Car & Driver magazine on the table next to me.  Who was I kidding?  Neither existed.

An hour went by and women came and went and I was getting more aggravated by the minute.  I finally got the nerve to go see my new receptionist friend and ask why I had not been called.  She informed me my doctor only ordered the mammogram on my breast with the lump, but the procedure called for having a mammogram on both breasts.  I wanted to ask why she hadn’t informed me of this earlier, but then I remembered who I was dealing with.  I pulled out my cell phone, called my doctor’s office and spoke to my doctor’s assistant to have the order corrected.  A few moments later the revised order came through. After a short wait, I was called for my mammogram.

As I entered the room, my middle-aged technician informed me she had only had a few male patients for mammograms. Then she gave me the disturbing news mine may be difficult due to my small breasts. The procedure went as well as expected, as I really had nothing to compare it to. I made sure to tell her I would recommend her to all my male friends!

A few minutes later, the radiologist informed me she did not like what she saw and recommended an ultrasound to provide better clarity.  This ultimately led to a biopsy the following week.

On December 3, 2013 the telephone call came informing me I had breast cancer.  No one can prepare themselves for this type of news. I had to face the reality that my life, along with my family’s, was about to take a new direction.

I had many questions and now wanted answers.  I first notified Elana and then had to find the courage to tell my two sons, aged 22 and 24, who at the time were living in different cities.  As much as I would have preferred this conversation face-to-face, it just wasn’t possible.  They all handled the news well and were overwhelmingly supportive.

The next step was to meet with my oncologist, radiologist, surgeon and a nurse navigator.  They all proved to be compassionate and sensitive to what I was experiencing.  Many of my questions were answered, but I learned there was little data known about male breast cancer. This meant my treatments would be similar to treatments for women with breast cancer.  This added to my emotional stress, wondering if enough is known about treatment for men.  Male breast cancer is an “orphan cancer,” making up less than 1% of all breast cancers.

My treatment included a mastectomy of my right breast.  The results showed the cancer had spread to a lymph node near the tumor.  My doctors encouraged me to have an ALND (axillary lymph node dissection) to remove more lymph nodes from under my right arm to determine if the cancer had spread further.  Finally, a bit of good news, all were clear.  After these two procedures, I underwent 5½ months of chemotherapy, followed by 6½ weeks of radiation.

Needless to say, 2014 was a lap around the sun I would like to forget, as would my wife who stood by me through this difficult time that impacted both of our lives.  I began taking the drug Tamoxifen following my treatments and will be taking it for a total of ten years.  My side effects include hot flashes and mood swings as well as body aches.  I hope something will be developed which will provide the same or better results without the side effects.

During my initial visit with my oncologist, he asked questions about my family history and ancestry.  When he learned I was of Ashkenazi Jewish descent, he recommended I undergo BRCA1/2 genetic testing.  The results came back positive for a BRCA2 mutation.  Meeting with a genetic counselor we were able to determine the BRCA2 mutation came from my father’s side of the family.

Upon learning of my positive test results, it was again time to make a difficult call to my sons. I had to tell them about the risks associated with the mutation and how this could impact them.  I also felt an obligation to tell my two siblings, and to write letters to about 30 cousins who were scattered throughout the United States to let them know about my genetic test results.  It was then up to each of them to make their own decisions about genetic testing, but I always remained open to talking to them.

I have been truly surprised over the past three years how so few people are aware men can and do get breast cancer.  Even more surprising is the lack of awareness of the genetic component to cancer.  I have shared my story with many involved in the medical profession.  Although many of them are outside of the field of cancer, I’ve found their understanding of BRCA1/2 gene mutations is either limited or non-existent.  I also have friends who were aware of the BRCA gene, but thought it could only be carried by women.  This, unfortunately, is a common misconception.

In a few weeks, I will turn 64. I live in Mequon, just outside Milwaukee, Wisconsin with Elana and our dog Farley. In early 2016, I completed the liquidation of several Ace Hardware stores I co-owned for the past 30 years.  I spend my days as an independent sales representative, which keeps me busy and provides me the opportunity to talk with a variety of people throughout the day.  Since last April, I have been writing blog posts for Ambry Genetics and sharing my story about male breast cancer and the BRCA1/2 gene.  My blog posts can be found at patients.ambrygen.com.

I continue to explore my true passion, which is to work in a hospital with cancer patients as a patient navigator.  Having been through the cancer journey, I believe I can work with new cancer patients to help them know what questions to ask their health care professionals.  I have seen this new trend evolving within the best cancer hospitals around the country.  Having walked the walk, I know I can help others diagnosed with cancer get through their journey.  In the meantime, I continue to take any opportunity to inform people that when they see their health care professionals for annual check-ups they need to be proactive.  They must inform their doctor if they have cancer in their family, why it may be important to meet with a genetic counselor.

I am pleased to become part of the Male Breast Cancer Coalition where I can do my part in bringing awareness that male breast cancer exists and making sure no man goes through his battle with breast cancer alone, whether they live in my community or beyond.’