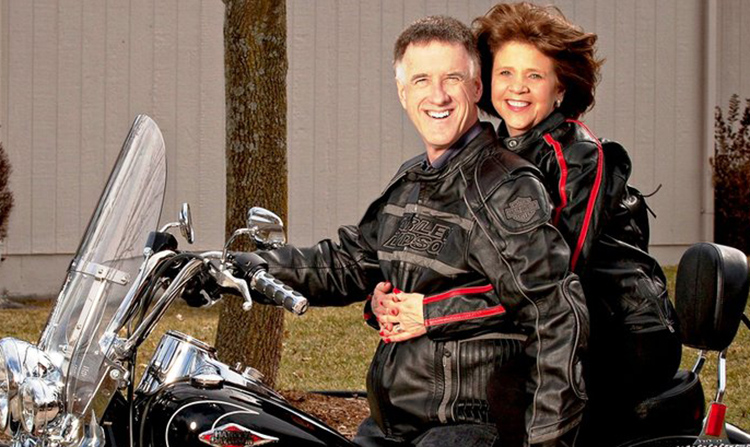 My name is Bill Millard and I have something in common with my wife Barbara. I’m a breast cancer survivor.

In February 2005, I asked a neighbor to join me for coffee. The neighbor, a widow who had recently lost her husband to cancer, felt she wasn’t yet ready to date. But, she added, “Do you know Barbara Cunningham? I’d love to introduce you two.”  This friend was meant to be a matchmaker. Barbara and I were married in March of 2006.

Neither of us was a stranger to cancer. In 1994, one of my ten-year-old twins was diagnosed with Hodgkin’s Lymphoma and endured rigorous chemo and radiation. During one of his treatments, he told me that when he grew up he wanted to go into the field of medicine and help people. Thankfully, he recovered and today is thriving as a pharmacist at the Children’s Hospital of Denver. Barbara had also fought her own cancer battle in 2001 after being diagnosed with Stage 3 rectal cancer. She was treated with surgery at Memorial Sloan Kettering Hospital in NYC, as well as with radiation and chemo treatments in Kansas City. Thankfully, her outcome was also a successful one.

After just a year of marriage, cancer reared its ugly head again. In Spring 2007, I noticed a stain on my t-shirt which I determined was a discharge coming from my left nipple.  Barbara urged me to find answers, so I made an appointment with my internist. He wasn’t concerned about what he believed to be a cyst, however, wanting to be sure, he sent me to have an ultrasound and a mammogram. The tests showed a small mass and I was sent on to a surgeon. Like the internist, the surgeon didn’t feel there was cause for concern, but at the same time, recommended the mass be removed and biopsied. When we went for follow-up, we thought it was just a routine visit to look at the incision and were shocked when the surgeon said the word “malignant.” We weren’t expected this news, or to be told a mastectomy was recommended.

Male, mammogram, mastectomy – those words just didn’t seem to fit together. However, we were greatly relieved to learn the tumor was Stage 1 and not aggressive. Within weeks, I had a left side mastectomy at Overland Park Regional Medical Center and began the search for answers regarding follow-up treatment.

The first oncologist indicated my breast cancer was caught early and therefore, an annual mammogram was sufficient preventative action. There would be no need for chemo or radiation, but the possibility of taking the drug Tamoxifen as a follow-up treatment was discussed. In my case, the doctor felt the risks of chemo outweighed the possible benefits and recommended against it. A second opinion resulted in the same recommendation, so I chose not to take Tamoxifen. Finally, came the BRCA test which determines genetic linkages. Again, I was blessed with the news I am negative for any mutation.

I had just turned 58 at the time of my diagnosis. I went from the discovery of cancer to surgery to healing in a matter of weeks.  This sequence fit my personality as an engineer – identify a problem, analyze it, fix it and move on. Because I was able to deal with it so quickly, I have often felt unworthy to say I had cancer because I didn’t have to suffer through months of chemo and radiation like many cancer patients do. In addition, I was not especially comfortable discussing the topic – nor were my peers and co-workers. My boss at the time suggested we refer to it in the office as a tumor on the chest. His comment did nothing to increase my comfort level.

A few months after surgery, we went to Australia where we’d planned to snorkel on the Great Barrier Reef. As I prepared to get in the water, I was uncomfortable knowing once my shirt was off, the mastectomy scar and one missing nipple would be there for everyone to see. After a bit of coaxing from my loving wife, I began to get comfortable. Then I realized my concern was for nothing since I’d be wearing a wet suit!  Still, I was self-conscious.

The same summer we went to a friend’s house for a barbeque and pool party.  I got in the pool wearing my swim trunks and a t-shirt.  I told my friends I didn’t want to gross them out.  Being the long-term, great (and sarcastic) friends they were, they said, “No worries, you weren’t that great looking to start with!”

About three years after surgery, when we were participating in the Susan G. Komen walk in Kansas City, I decided it was time to go public, and wore my pink survivor T-shirt for all to see. I’d reached a level of comfort in sharing the story and knew other men needed to know males get breast cancer, too.

Even though I had experienced breast cancer first hand, we really didn’t realize the scope of this disease. The realization came the following July. Prior to my diagnosis, Barbara had already registered to participate in the Avon 2-Day Walk for Breast Cancer in San Francisco. She had been participating in various breast cancer walks because, at that point in time, people weren’t talking openly about rectal cancer and she felt “no one is going to sponsor a walk for our butts!”

After the first day of the walk, Barbara called me in the evening to share her experiences. To her, one of the most moving events was the ritual of placing a pink sash randomly on a participant every three minutes during the walk. Every three minutes signified how frequently a woman was diagnosed with breast cancer in 2006 (the statistics are now one woman every two minutes). At the end of the day, she found that looking around at all the women wearing pink sashes was unsettling. The other statistic Barbara shared during our call was about 1690 men were diagnosed each year with breast cancer.  I immediately responded saying, “That’s a man every five hours.” While the numbers are significantly lower than the female statistic, we were both shocked to learn it was nearly five men per day. In 2017, about 2470 men are expected to be diagnosed with breast cancer – one man every 3.5 hours.

Friends and family had contributed $2840 toward this walk. The following is an excerpt from the letter Barbara sent thanking them for their support:

My T-shirt (that I wore in the walk) said: “I walk in celebration of my husband Bill – male breast cancer survivor.” Many people had signs on their back indicating their reason for walking. Many didn’t have such a positive outcome. I’m so grateful that mine was able to say “in celebration”.

In December of the same year, Barbara, a professor at a local community college, went in for her annual mammogram. Once again, cancer reared its ugly head when a pea-sized mass was found in her left breast. I told her she was way too competitive, and didn’t have to do everything I did.  A look back at the prior year’s mammogram showed the mass had been there for more than a year! On the previous mammogram, it had been so faint, that it was only perceptible in retrospect. Barbara’s cancer was much more aggressive than mine, and that it had been growing for more than a year. Her doctor felt a lumpectomy followed by radiation and Arimidex would be sufficient. After having the lumpectomy, Barbara decided to get a second opinion regarding follow-up. She wanted to be sure there was no need for chemotherapy. On Valentine’s Day, 2009, her doctor’s visit brought different news. This oncologist told Barbara her breast cancer was multi-focal and recommended a total mastectomy. She was whisked off to the surgeon’s office and a mastectomy was scheduled for the following week. She was overwhelmed and disturbed her original surgeon had missed these “facts”.

A few days later, she arrived home to find me anxious to talk. I had been reviewing the original pathology report and felt the oncologist who gave the second opinion had misread the report – perhaps there was no need for the total mastectomy. I knew I was no doctor, but it just didn’t smell right. Further consultations with Barbara’s surgeon confirmed my attempted analysis of the report. The cancer was not multifocal and the tumor had been successfully removed with clear margins by means of the lumpectomy. And, more good news, Barbara’s genetic testing also showed no genetic linkage.

While we refuse to spend our days worrying about cancer, we are well aware of our increased risks for “C”. Since my breast cancer diagnosis, doctors have been watching my slightly elevated PSA levels with blood tests and biopsies. Early detection was key for me with breast cancer. If prostate cancer decides to take up residency in my body, I’m going to detect and beat that beast early as well.

In the late summer of 2010, we decided to live it up and bought a Harley Davidson.  A few months later we participated in a Harley ride for breast cancer and started from Menorah hospital.  The speaker asked if there were any cancer patients or survivors in the group.  Several women raised their hands, and, so did I.  I was surprised at the level of support I received from the leather-clad Harley riders.  Some of the group gained a new understanding of breast cancer that day – it does not know race, age, or religion.  Or gender.