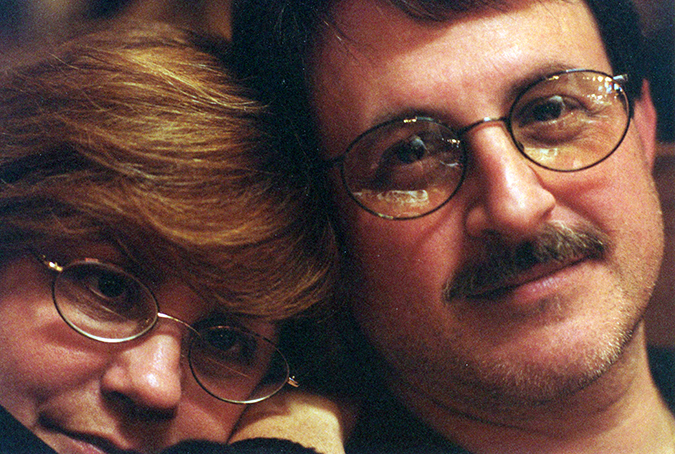 The dog we rescued may have actually saved my life.
I had an amazing, affectionate and beautiful Rhodesian Ridgeback/Boxer mix named Prynne. She lost
her eyesight to glaucoma at the beginning of 2012 but the painful pressure stayed so she underwent a
procedure to remove her eyes, immediately relieving the pain. Dogs can do just fine without their sight
if they know their surroundings and have someone to rely on in new places. I became her “seeing eye human.”
She would show affection by pushing her nose under my arm and rest her head on my chest.

But this is not really about my dog. Her surgical scars occasionally “wept” a small droplet of blood, so I paid no attention to the blood drop on the front of my t-shirt when I woke up on April 25th, a few months later. But when it was there again the next day, knowing she hadn’t nuzzled me the night before, I went right to the web and started researching. From the sites of the Mayo Clinic, NIH, and Brigham and Women’s Hospital I quickly found that there were three things that would cause a bloody discharge like that – a sub-tropical fungal  infection, a serious irritation from clothing rubbing on the nipple, and Ductal Carcinoma In Situ (DCIS, cancer in the mammary ducts). Since my clothes fit fine and rarely traveled, it didn’t give me much wiggle room. I knew in my gut, without speaking with a doctor, that I had breast cancer.

I also learned that only 2400 or so men were expected to be diagnosed with breast cancer of any kind that year, and around 440 were expected to die from it. To my surprise, I learned that is nearly five times the mortality rate of women with the same diagnosis. Why? Because men don’t look for it, don’t check themselves, aren’t informed by any of their physicians or family members to do self-examinations just as every woman is counselled at or shortly after their first menstrual period. My own non-scientific survey found that only one out of all the men I knew had been advised to do a regular self-examination of their breasts and that instance happened while the doctor was counselling his wife about her breast cancer diagnosis.

On the next day my doctor confirmed that this was quite unusual, that he hadn’t seen it in any of his patients, and we set up an appointment with a surgeon for the next week. Within the week, my new surgeon scheduled me for a mammogram and an ultrasound examination. It was at the Women’s Diagnostic Center. I was the only man there, staff included. I’m sure the women in the waiting room thought I was there with my wife, and the one that was in my line of sight when they called me in did a double-take. The technician had never done a mammogram on a man. She was visibly flustered. I told her to think of me as a flat-chested woman with hair on my breasts. With a nervous giggle she proceeded with the mammogram, not even sure about exposures for a man. She had to go into the back and dig up a lead apron that was appropriate for me to wear around my groin. It took her two attempts to get a good image and called the radiologist to look at them. This was followed immediately by an ultrasound (again, a technician who had no experience doing this on a man). They found a poorly defined tiny shadow. But no one was sure what they were looking at.

On the 18th of May, the pathology report of my breast tissue biopsy came in – positive for cancer – confirming what I had known in the pit of my stomach for more than three weeks.  On June 1st, five weeks after noticing the blood spot on my t-shirt, my surgeon performed a modified radical right mastectomy, including lymph nodes and the nipple. He had probably done hundreds of  mastectomies in his career; I was his eleventh male patient. I was up, walking around a few hours after surgery, much sooner than anyone expected. I was doing circuits around the nurses’ station before I went to sleep for the night. Well, sleep isn’t a good word for it. There was a drain inserted below the incision, between my ribs, and every breath I took felt like a knife going into my chest, even with the pain medications. That drain was more painful than the healing surgical site.

What I didn’t get was the same support and counselling that most women breast cancer patients get: what to expect physically, what to expect psychologically, instructions on how to minimize the pain you experienced from the bounce of every step you took while the surgical site healed. No one mentioned using a support garment to keep more comfortable. Women are offered support brassieres or elasticized garments to wear. But no one thought to mention it to me. It wasn’t until three weeks later, after the drain was out, that a Nurse Navigator followed up with a phone call to discuss my progress.  She told me about using a compression t-shirt, like athletes wear, but to get a size smaller than normal. It was hard to get in and out of, but boy it made me feel much, much better immediately.

Waiting for the pathology report was nerve racking. Ten days later I got a call from my surgeon: the margins were all clean, the lymph nodes clean, there was no sign of any abnormal cells beyond the growth in the ducts. I was “staged” at Zero. The best results you could ask for. I now had an oncologist. Since I was evaluated at Stage Zero, I was not going to need chemo- or radiation therapy. My cancer was identified as being Estrogen Receptor Positive (ER+) – which means that its growth was spurred on by the presence of estrogen. Why should I be concerned about that? In case you didn’t know – men produce estrogen. That’s right, the hormone that women produce. We don’t produce nearly as much, but men do produce it (women also produce testosterone, also in small amounts). In lieu of chemo and radiation I was placed on Tamoxifen therapy. This reduces the amount of estrogen I was producing, thereby diminishing the possibility of spurring on the growth of any errant breast cancer cells that may have been missed or that were floating around in my body.

One evening, while out with my wife, I turned cherry red and started to sweat profusely. She looked at me, at my bewildered expression and smiled and welcomed me to her world of hot flashes. It is the reduced production of estrogen during menopause that causes women to experience hot flashes. I was having my first hot flash.  During my discussions with my oncologist I learned that my DCIS was the most common form of breast cancer in women and men. I also learned some other unsettling things:

That made the decision to follow up with a prophylactic mastectomy of my left breast pretty easy. It was done on November 27th, just short of six months after the first mastectomy. The pathology report showed “altered cells” – not cancerous, not pre-cancerous, but of question. They could have become cancerous. But not now that they were no longer part of my body. I never questioned the decision to have the second mastectomy, and had I been counselled in a timely fashion about the huge risks that stacked up against me before the first surgery, I would have probably have done both at the same time.

I talked to both my sister and son about taking the BRCA gene marker test, and they did. Both are positive. My mother was negative. That means my father was the “source” of the genetic anomaly and passed it to my sister, me, and my son. It makes a solid connection to the frequency of breast and ovarian cancer on his side of the family. My sister and my son are both following up on this with their physicians.  A month or so later, at the end of 2012, my oncologist took me off the Tamoxifen. The hot flashes stopped about three weeks later! This past January my oncologist tested me and said I was still cancer free and to come back in a year.

I learned many lessons from this experience that I want to share.

I could not have come through this as well as I have if it weren’t for the support and love my wife and son, family and friends provided. My wonderful dog, Prynne, sat by my side every day and night while I was healing. She was with me every step of the way. In October of 2013, she died in my arms.

On June 1, 2015 I celebrated my second third birthday.