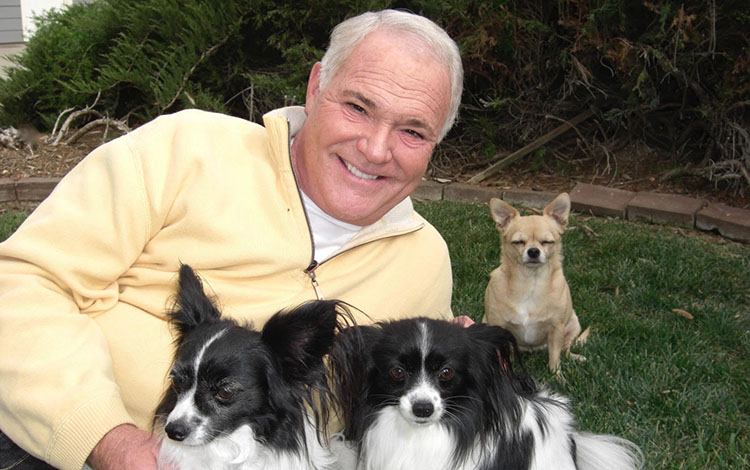 It’s funny how something like that changes your whole perspective. I used to think of that day as a day to celebrate being part Irish by drinking green beer. But now and forevermore it will be the day I found out I was right.

You see, I had gone to the doctor 13 months earlier with my suspicions. I had been playing on the floor with my dogs when one of them stepped on my right nipple and I felt the lump under her paw. But my primary doctor said, “No, it’s not breast cancer. Men don’t get breast cancer. But I’ll refer you to a specialist, if you like.”

The “specialist” was just as certain. He felt the lump and asked my age (53) and diagnosed me with “gynecomastia.” Now, before you go look it up, it’s a swelling of a man’s breast associated with hormone imbalances, usually occurring in adolescence or middle age. He was a surgeon who specialized in breast augmentation on women, and in “20 years of practice I have never seen a man with breast cancer.” He wouldn’t even perform a biopsy on my lump, but he did suggest I “monitor” it, and come back if it changed.

Well, a year later it had doubled to about the size of a pencil eraser, and it hurt. So he finally agreed to do a lumpectomy. Afterward he told my wife and me he had looked at the tissue and it wasn’t cancerous, but he’d send it to the lab anyway. So, when I came back a week later to have the stitches removed, you can imagine my feelings when he walked in with the lab report and a concerned look on his face. He had to tell me I did indeed have breast cancer – and he hadn’t even removed all of it! That was the last time I saw that doctor.

In April, a different surgeon performed a bilateral mastectomy (better safe than sorry), and removed my sentinel lymph nodes to see if the cancer had spread outside my breasts. My newly acquired oncologist and I awaited the pathologist’s report. It wasn’t good, but it wasn’t as bad as it could have been. The cancer was estrogen-positive and advanced, but the nodes were clear. So he (and a separate oncologist) recommended aggressive chemotherapy, but no radiology. (By the way, they both agreed if the first surgeon had correctly diagnosed it 13 months prior, the mastectomies would have been enough.)

I was ready to begin treatment right away, but my job provided an obstacle or two. You see, I was a veteran newscaster for the ABC TV affiliate in San Diego, KGTV-10. Now, some people can soldier on through chemo and still do their jobs, but when your job involves being up and at ‘em at 2:00a.m., being energetic and alert, mentally sharp and – most importantly – looking good, then the chances dwindle – a lot! In addition to those drawbacks, the treatments were to begin in the middle of May – the most important ratings period (or “Sweeps”) of the year. My boss agreed I shouldn’t be on the air during chemo, but neither one of us wanted my sabbatical to begin in mid-May.

Then my boss had a brilliant idea: I would chronicle my “battle” with a blog, posted on our web page, 10News.com. I took it a step further, suggesting I end the month of May with a series of stories about my diagnosis and treatment, and encouraging viewers to keep up with my recovery on the web. So, “Bill’s Battle With Breast Cancer” was born.

I had no idea how much effort – and how many rewards – awaited me. Beginning with my first chemo treatment (Adriamycin and Cytoxan), I tried to write an entry every day (sometimes including pictures, when appropriate), describing how I felt – physically, mentally and emotionally.

You should know, before I go further, my wife and I are deeply committed Christians. In fact, when I came home with the awful diagnosis that March day, we both said, “What does the Lord intend for us to learn through this, and how will He make “all things work together for good’?” And I told my boss, if I did an online journal, it would be liberally sprinkled with the prayers and Bible verses we were depending on to get us through this.

Despite my faith, days after the second treatment, I was ready to throw in the towel. The chemo whipped my butt, took every bit of what a colleague once called my “anchorman hair,” and left me exhausted and willing to take my chances with the cancer. But my wife, being the loving and wise woman she is, changed my mind with a photograph. It had been taken several weeks previously – May 10, to be exact – and it showed my first grandchild on the day of his birth. “You are going to keep fighting,” she told me, “because little William needs a grandpa.” How can you argue with that?!

My worst physical reaction to the treatment came after #3 – and again my wife was there to help get me through it. Adriamycin (nicknamed “Red Death” by those in the cancer field with a sick sense of humor) and Cytoxan both work by killing cells which reproduce quickly – like cancer cells, and hair cells, and stomach lining cells, and infection-fighting white blood cells. When the latter cells get too low, a patient can die from a common cold. So after my third chemo and subsequent blood test, I was given an injection of something called Neulasta. It works by “revving up” bone marrow to produce replacement white cells. But in rare cases (like mine), it causes your bones to feel like they’re on fire – a raging inferno of pain. And no drug on Earth can quell it. The only thing that worked was my wife’s touch, as she sat on the edge of the bed stroking my throbbing head. Eventually, I fell asleep, and when I awakened three hours later, she was still sitting there, stroking my head.

Before I even began treatment, I promised my wife, and I promised those who followed my online journal, I would be completely transparent. No false courage, but no overblown complaining either. My readers had a right to see exactly what a cancer battle was like, from my perspective. It was amazing the effect it had on the thousands of people who posted responses or who mailed and emailed me notes of encouragement.

Time after time I heard from men or their wives, telling me they only discovered their own male breast cancer after reading my blog. I established contact with more than a dozen such men in the Greater San Diego area, and corresponded with dozens more around the country and the world. To this day you can Google my name and learn parts of my battle – although when my former station, KGTV, was purchased by the E. W. Scripps Company, they decided it was no longer necessary to continue offering my journal on the 10News.com website. I was very disappointed by that, because I continued to hear from people long after it was taken off; people who appreciated it for not just shedding light on male breast cancer, but for pulling back the curtain on cancer treatment in general. I was also disappointed, because throughout my ordeal I learned the surprising value of journaling – especially insofar as it helped me examine what I was going through, how I was feeling about it, and how it changed me.

I mentioned at the beginning how cancer changes your perspective about dates. Well, August 25th will always remembered as my “Liberation Day.” That was the day my oncologist analyzed my blood and pronounced me “cured” of cancer. Then we both had a cynical laugh, because one is never “cured” of cancer. In fact, 18 months later I was diagnosed with melanoma, but all that required was surgery – and frequent checkups to this day. My DNA was also analyzed for the presence of the BRCA gene mutation. Fortunately, I did not have it. So what caused my cancer remains very much a mystery.

Still, I am today (as far as anyone knows) cancer free, more than 12 years after my original diagnosis. I credit the Lord, my wonderful wife, and miracles of modern medicine for that. And I thank my boss for allowing me to share my battle on the World Wide Web, and the thousands upon thousands who read and responded to it. That made the whole thing worthwhile.