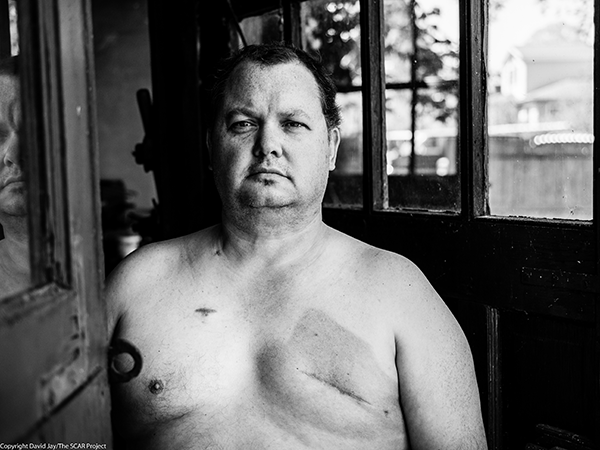 We are very sad to announce the passing of Bill Becker, the beloved husband of Lisa. Bill died at age 46 (Sept. 17, 2014)  from Male Breast Cancer and decided to donate his body to Harvard Medical School so that they can research this illness and help save others.  As such, there will be no funeral, but there will be shivah, and a memorial service in memory of Bill. There will be a short service on Friday, September 19 at 3pm and a Memorial service on Sunday, September 21 at 1:30pm at the home of Lisa’s sister and brother-in-law, Jennifer and Bob, 40 Hawthorne Drive, Fairfield.

Our condolences to Lisa and the entire Becker family; may they all be comforted by many sweet and happy memories, as we pray G-d comforts all those who mourn, and may the memory of your beloved Bill be for a blessing.
“Times Like These”  NEW  Trailer 9/9/14

________
Initial diagnosis of stage III male breast cancer was in May of 2011.  In June I had surgery, a full mastectomy of my left pectoral.  Chemotherapy followed at the end of July and ran in two phases, first it was a full throttle blast of AC + T for two months and then the second phase was just Taxol which ended in December of 2011.  I was a hot mess at the end of it, very tired and just couldn’t take much more.  However, therapy wasn’t finished; my oncologist asked me to see a radiologist about bettering my chances of survivorship with radiation therapy.   Unwillingly, I continued on with radiation into February of 2012…worst sun burn of my life is the best way to describe the radiation burns that I got.  Even after applying all the ointments they recommended.  I was prescribed Tamoxifen to help combat the cancer.  The fact that I’m a man plays into the possibilities of not being able to handle the side-effects of Tamoxifen.  It was more like everyone around me not being able to tolerate me because of the side-effects of the Tamoxifen.  My normal easy outgoing self, turned into a raging lunatic with a very short fuse.  To the point, that I was wrecking both my home life and stirring up hornets nests at work.  Shortly after being taken off of the Tamoxifen, I began to feel some pain in my hip.  It was time for a bone scan to get an idea of what might be going on.

Suspicious spots were found on my hip and lower spine, a biopsy reviled my new stage, IV metastatic breast cancer.  We spent the spring of 2013 attacking the new spots with more radiation and hormone therapy medications.  More bone scans reveiled that the spots were not sitting still and we needed to go back to chemotherapy, not to mention that the spot on my hip now had a fracture in it.  The summer brought on a new chemotherapy that included a stay at the hospital for ACHF.  Bone Scans in early autumn found new spots and more movement of the originals.  We weren’t getting very far with the stopping of the cancer.  A trip into NYC to Sloan for a biopsy and a better understanding of the now spread cancer gave us a new direction of treatment for the winter.  The new chemotherapy and some radiation to combat some pain have been on my plate all through the winter of 2013/2014.  Currently, bone scans are pending with fingers crossed that we are getting a lock down of these spots.  My story has only one ending…my battle of male breast cancer will continue for the rest of my life.

So what have I done with the cards I’ve been dealt…surrounding myself with amazing people.  My family has not wavered in their support of me.  I’ve received excellent medical treatment and have been given tremendous support from other male breast cancer survivors.

I am creating a foundation to raise awareness of male breast cancer.  Breastcancerborthers.org will support men fighting breast cancer by raising awareness and funding research for men with breast cancer.  The treatment of male breast cancer is based on knowledge of treatment for women.  While our tissue is very similar, men are a little different in how we are able to tolerate some of the treatments.  Please support breastcancerbrothers.org in our fight to keep more men alive by raising awareness and funding research, because MEN GET BREAST CANCER TOO!!