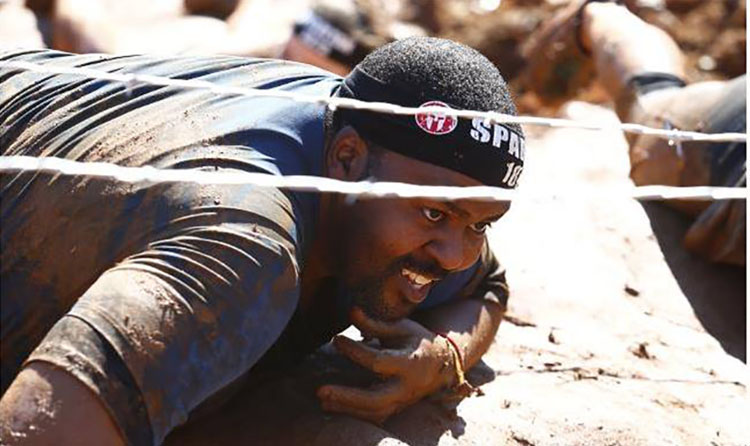 On Feb 14, 2016, my wife noticed a lump in my left pec. After examining the lump, I noticed it was small and hard. I had never noticed it before, but after the discovery it was hard to forget. I called my doctor right away and was scheduled for an appointment that Friday. My doctor thought it could possibly be a cyst or fatty tissue and was not too worried about it since I had been working out a lot and losing weight. However, he said he would refer me to get a mammogram based on the location just to be sure.

I was scheduled to start a fitness boot camp in a couple weeks and asked him if it was okay to continue. Of course, he gave me the green light and I continued to live my life. A week before boot camp ended, I received a call to come in and get my mammogram. After receiving the mammogram which was quite the experience being a male, they discovered something of concern and wanted me to come back for a biopsy. They originally thought was that it was a cyst, but they wanted to make sure.

Since I was unable to work out for a couple of days, I asked that it be scheduled the following week after my boot camp. I was awarded the biggest loser for boot camp, which was my goal and now needed to find out what this lump was. After my biopsy, I received a call two days later while at work that is was indeed cancer. I was diagnosed with stage II breast cancer at age 33, and everything I knew at the moment changed. I was scheduled to run a Spartan obstacle race two days later and instead of cancelling decided to give it my all. Over the next several weeks I would meet with the oncologist, surgeon, and genetics tester, go to work, and continue to race until a couple of days leading up to surgery.

No one in my family had a history of breast cancer from either side although there were other cancers further up the line. Genetics testing was unable to track where the cancer came from and did not show that it would be passed on. My breast cancer was HER2-positive, which is an aggressive form of the disease. I was also instructed that if my wife and I wanted to have children, I should also visit a fertility clinic. Due to appointments and work, I was unable to make it in time. Two days before my surgery, I found out my wife was pregnant. We would later find out it was a girl.

Leading up to surgery, I was considering a double mastectomy due to me being Her2-positive. I was worried it would come back to the other side. The day of surgery, my surgeon came back and said the insurance company approved the surgery for both. After healing from surgery, I was scheduled to get my chemo port installed and begin chemo treatment. My chemo treatments would consist of Herceptin, Taxotere, Carboplatin and Perjeta. I was scheduled for six total treatments, but only made it to 5 treatments. The chemo drugs begin impacting my heart function, which caused some concerns, since now it was impacting a vital organ.

I experienced the normal side effects like hair loss, sore throat and major stomach issues. I also noticed I had the black toenails and started to retain fluid and gain weight. During this time, I continued to work as I went through treatment.

As I began to heal, and with chemo done, the oncologist recommended radiation. However, because of a previous surgery and installation of my defibrillator, this would require moving and reinstalling the device. Since it was my left side it would has impact my heart which was the reason chemo was stopped.

So, it was decided to not have radiation and that I would continue to get checked every few months to make sure there were no changes or new lumps. I was finally able to do the one thing I was looking forward to from the first day of chemo! I was able to ring the bell. Less than a month later, we welcomed my daughter into the world. I feel extremely blessed and thank God for the guidance to allow me to go through all my treatment prior to my daughter coming.

It has now been almost two years since I was originally diagnosed with breast cancer and had surgery to remove it. Although some of my hair has returned, not all is back. I have struggled with my weight and continue to work on getting back to how active I used to be. My daughter gives me so much life and is a constant reminder to keep living and enjoy every moment. My journey is not over, it is just beginning. But I am a survivor!