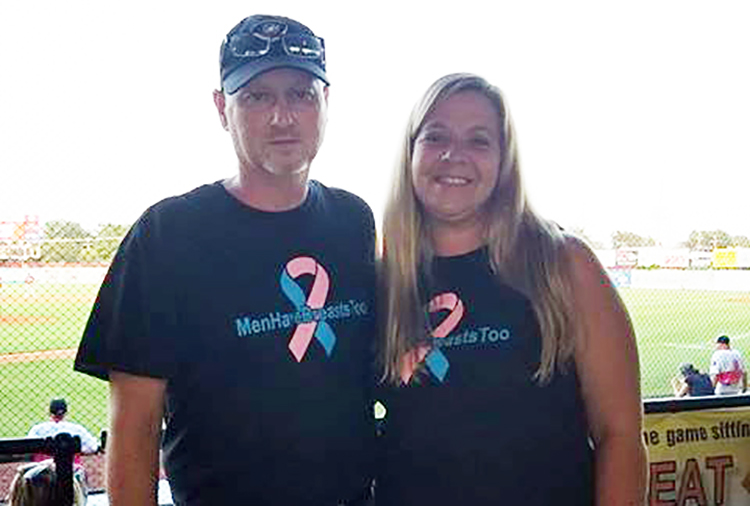 Hi my name is Karla Garrison, aged 46. On January 30th, 2019, my husband Anthony (Tony) Garrison, died of breast cancer, age 49. We had three children, one girl of his, Katie Garrison, age 23, and two boys of mine, Caleb Goodson, age 19, and Cole McDaniel, age 12. We had been together since 2012, and he was the love of my life. We loved going to St Louis Cardinals games together.

We found out in December 2015 he had breast cancer. We had talked about getting married before this, so we decided to get married, although he asked me, are you sure you still want to be with me after this. I said, are you crazy, my love hasn’t changed for you because you have cancer. I want to be your wife no matter what. So we got married on December 28th 2015. It was the best day of my life to become Mrs Garrison.

Tony had surgery to have the tumor removed from his breast and did chemo and radiation. When a chemo would quit working, he would try another one. He went through this for three years. He was a very strong man and worked all the time until this past year when he couldn’t do it anymore. He was doing well with all the treatments, then we went for a pet scan and they found a tumor on his brain. He started radiation on that in September, and was going well, when in November we went to the ER because he wasn’t feeling well. They told us he had pneumonia, so he stayed a few days in the hospital.

A few weeks later he started feeling bad so he went back to the hospital and they decided to do a scope on his lung to see what was going on. They told us he had a lung fungus called blastomycosis, which grows in rivers and lakes. So they started treating him for that but in the mean time we had to stop all other treatments for the cancer because he was too weak for that. He was in the hospital for over three weeks, and was still really weak and couldn’t walk or do much. He told me he wanted to go home. I said, are you sure this is what you want and he said, I just want to be at home. We got hospice involved and came home. He was doing well at first but his mind wasn’t all there all the time. He spent his last weeks at home where he wanted to be with his two German Shepherds he loved so much. They were by his side a lot.

This is still really hard for me right now. I’m just so glad God brought him into my life to show me what real love is because he showed me that all the time. I got to spend six wonderful years with him. My husband gained his wings on January 30, 2019. He will always be remembered in my heart and in the hearts of everyone he knew. I Love you Tony Garrison, with all my heart forever and ever, and you will never be forgotten.

Right now I’m still really hurting because I don’t know how to go on without him. I just hope and pray I did all I could do for him. He was such a great man. I know he is still with me every day and always will be.

PICTURE CAPTION
This is my husband when he had breast cancer. We were at the Evansville Otters baseball game and it was the breast cancer awareness night, so, we were showing our support for my husband and letting other men know that they can get it too, not just women. 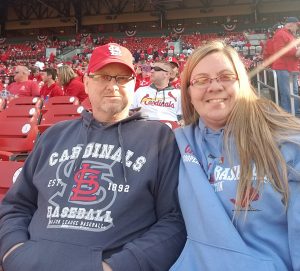 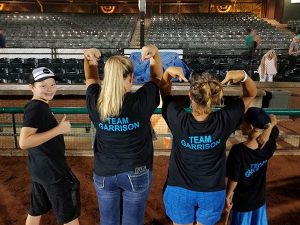 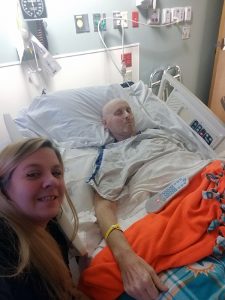 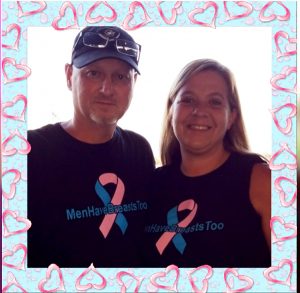 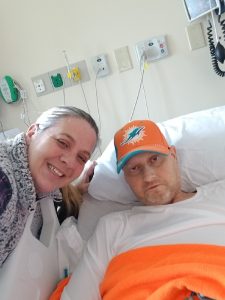