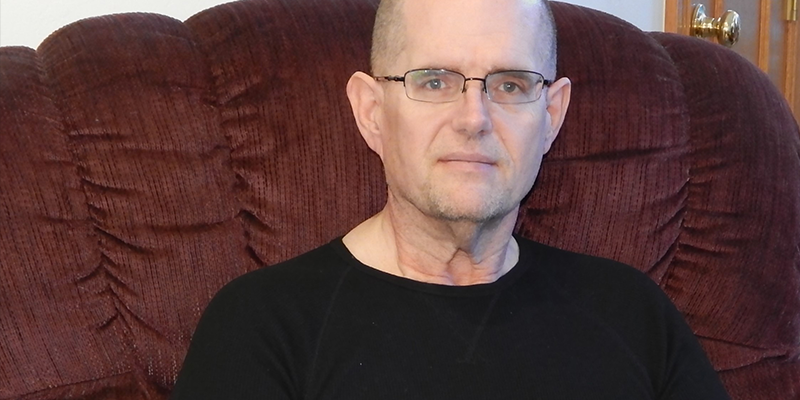 In early 2012 my wife noticed a lump just under my right nipple. It was very small and I remember telling her it’s probably nothing. Although I dismissed it at the time, I would check for the lump now and then to see if it was still there. The lump was so small that at times I couldn’t find it. After several different attempts of not being able to find the lump, I assumed it was gone and forgot about it.

On July 15, 2012 while putting on a shirt I felt the lump again. By then it had grown to about the size of a pea. I went to the doctor the next day and was surprised when he said, “It’s probably nothing, but let’s make sure it’s not breast cancer.” I replied, “It’s not WHAT? I didn’t think men could get breast cancer.” My doctor told me it’s rare, but men can and do get breast cancer.

After an ultrasound and a mammogram at a women’s center, I had a biopsy because the other tests were inconclusive. After the biopsy the doctor said the lump was probably nothing because she was able to get a better look at it and ‘it just didn’t appear to be anything.’ Two days later I received the phone call. “Mr. Merka, I’m sorry to inform you but it is cancer.” As soon as I heard, “I’m sorry,” I knew the rest of the conversation wasn’t going to be good.

During the next two weeks I saw a surgeon, underwent a PET scan (which was negative) and went for genetic testing to see if I had a BRCA1 or BRCA2 gene mutation. I was told my chances of having the gene mutations were very small. I guess they weren’t small enough because I tested BRCA 2 positive. Because children of a parent with a BRCA gene mutation have a 50% chance of inheriting the gene, my children were also tested. One of my daughters has inherited the BRCA 2 gene from me and is being monitored closely for any signs of cancer.

On August 6, 2012, at 51-years-old, I had a complete double mastectomy and four lymph nodes removed. The surgery revealed my cancer was stage 2A and had begun to spread. Although the cancer was caught early, I had to have four rounds of chemotherapy treatments, and will be on Exemestane until the end of 2017.

My wife and I tried researching male breast cancer, but found there was very little information on the disease. We read MBC is rare then everything else was about breast cancer in women. I watched several shows where doctors talked about MBC being rare then they went on to discuss breast cancer in women. While talking with people about my experience, we discovered there were a large number of men and women who didn’t know men can get breast cancer. Because of this lack of knowledge, we felt that something needed to be done to raise awareness about MALE BREAST CANCER.

On May 9th, 2013 with the help of my wife Lisa, Cheri Ambrose from the Blue Wave (since then Cheri and Bret Miller founded The Male Breast Cancer Coalition), Senator Brian Crain and House Representative Jon Echols together we made HISTORY! The Oklahoma Legislature signed the first resolution (SCR 28) declaring October 20-26, 2013 MALE BREAST CANCER AWARENESS WEEK. We had the 3rd week in October 2014 and 2015 too, but we had to go back and ask each year. Please help us make the third week of October MALE BREAST CANCER AWARENESS WEEK permanent across the country!

Had it not been for my wife and my children, this experience would have been unbearable! I cannot even begin to explain how much LOVE and support I received from them. I cannot thank them enough for everything they did, for staying by my side and for being there when things got bad. I will never forget what they did for me and I love them more than words can express!