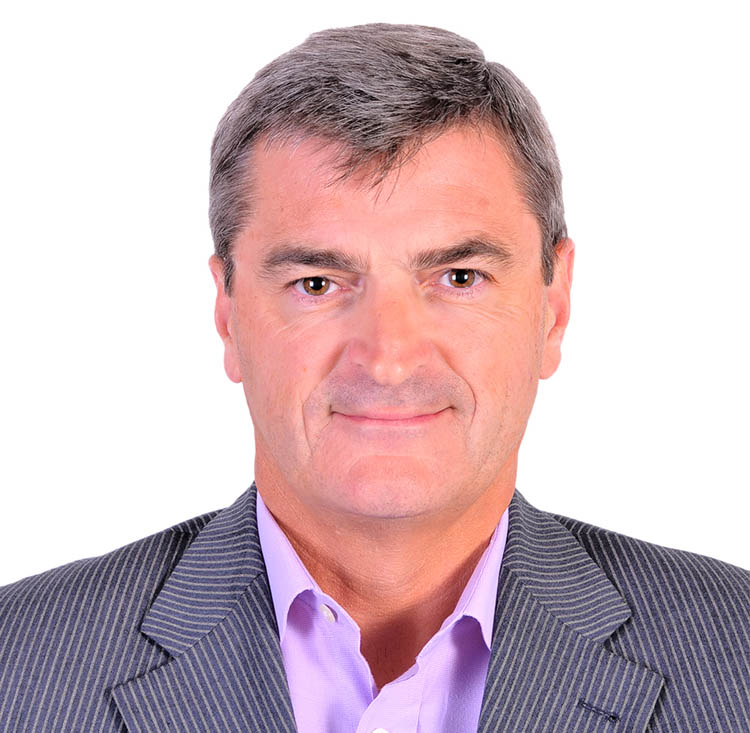 I was diagnosed with breast cancer in early 2013, at the age of 59.  As a fairly well informed, health-conscious man, I knew men my age should be on the lookout for signs of prostate or bowel cancer. But, I never imagined worrying about breast cancer. After all, breast cancer is a female disease. Isn’t it?

One evening just before Christmas 2012, while taking a shower, I noticed a small lump under my right nipple about the size of a small pea. As it wasn’t causing any pain or discomfort, I thought nothing more of it. I assumed it was probably a cyst – a fairly normal occurrence for someone of my ‘advancing years’ – and told myself it would simply go away on its own or be nothing to worry about.

I’d retired from mainstream corporate life two years earlier after a 35-year commercial career, including 22 years in finance, latterly as CFO of PepsiCo International. Most of my work life was spent globetrotting around the world and I was looking forward to a more relaxed pace of life. My wife and I were adjusting to our new lifestyle and anticipating an exciting new chapter in our lives. We were looking forward to splitting our time between our new apartment in Dubai and summers in the UK, spending more time with our two adult children – both in their 20s and living in London – and planned to see more of the world as a couple.

I also reckoned I was pretty fit and healthy for my age. I’d played football and cricket in my youth, had run almost every day of my life from the age of 30 –clocking up 10 marathons and 50 half-marathons – and more recently had taken up road cycling.

In January 2013 I decided it was time for a routine medical checkup in Dubai. The irony is that had I still been working in the pressure-cooker corporate world I probably wouldn’t have had enough spare time to take the medical – crazy when you think it only takes half a day; even more crazy given what happened next.

At the medical I asked them to recheck a historical lump on my left shoulder that had been previously diagnosed as a benign fatty tissue lipoma. Sure enough it was benign and no problem. ‘While you’re there,’ I said, “Can you just scan this other tiny lump? I’m sure it’s nothing but no harm in confirming.” The GP called with the scan results within 24 hour and said, “I think you need to get this checked out further. It doesn’t look right.” She referred me to a surgeon in Dubai, but they were also unsure, declaring it ‘probably benign’ but suggesting a biopsy, ‘within a few weeks – no great urgency’.

I emailed the ultrasound images to my wife and also sent them to my 26-year-old son, a medical student at University College London (UCL). There was no particular panic on my part; I just thought they might find the images interesting. On the contrary, they found them deeply worrying and immediately contacted the local GP at home in Somerset.

My wife was given the name of Simon Cawthorn, a breast cancer surgeon at the Spire Bristol Hospital, and made an appointment for us. She did her homework and felt strongly it was in fact cancer. But the hard part was getting me to concentrate and treat the issue urgently. She told me to get on a plane and get back home!

It was only when we walked into Mr. Cawthorn’s consulting room in mid-April, a full month after my medical, that I realized the gravity of the situation. Within 60 seconds of sitting down with Simon he said he was 99% certain it was breast cancer that the normal treatment was a mastectomy and he had booked me in for surgery in seven days time. To say I was taken aback is a huge understatement. I was completely shocked, and although I knew men could get breast cancer, I had no idea what a mastectomy would involve for a man. In those first few days I went through many emotions – anger, sadness, self-pity, and a sense of why me? But, then I thought I can get through this.

Breast cancer in women has been one of the success stories of health campaigning, with most now knowing to regularly check their breasts for changes. But what’s far less well known is that the disease also affects around 370 men in the UK each year. For women, early detection raises the chances of successful treatment. Yet according to Simon, the prognosis for men with breast cancer is worse than it is for women, but we don’t know why. He also believes breast cancer in men often goes undetected longer because the disease does not register with men as it does with women. Research suggests men with breast cancer in the family are at a higher risk. There is no history of the disease in my family.

Another known cause is a rare genetic condition called Klinefelter’s syndrome, where men are born with an extra X (female) chromosome. Lifestyle factors such as obesity, lack of exercise and high alcohol intake might also increase the risk of male breast cancer, although this hasn’t yet been established for certain.  Professor Anthony Swerdlow from the Institute of Cancer Research has been carrying out a study on 1,000 men with breast cancer across England and Wales since 2007.  ‘We have already found several genetic factors associated with risk, and are optimistic that we can find a great deal more about the cause of this cancer in men,’ he says.

In my case the cancer had spread into the lymph nodes in my armpit, so the nodes were removed along with the breast tissue. The four-hour operation was successful, but then came a wait while tissue samples were sent to the U.S. for Oncotype DX testing.  The test predicts the chance of a tumor returning establishes how effective chemotherapy would be. Thankfully, in my case, the cancer was caught early enough to be successfully treated.

My official diagnosis and treatment was:

My Oncotype DX results indicated the chances of the cancer returning were low, so I was thankfully spared both chemotherapy and radiotherapy treatment. This was good news, but in a strange way I felt I’d almost ‘missed out’ – that I hadn’t had cancer at all. I asked myself what all the fuss was about. When I see the hard times most women go through with surgery, chemo and radiotherapy, I feel like something of a fraud, even to the point of being embarrassed to say I have suffered breast cancer at all. I haven’t been through nearly half as much as most women with breast cancer, who I see as the real heroes. I certainly don’t feel like one!

Nonetheless it was a great relief to avoid the chemo. My son’s wedding was planned for early August that year and I had visions of myself in the official photographs either bald or wearing a wig and looking pale and frail. Instead, I was prescribed Tamoxifen, a drug often given to women with breast cancer as it suppresses production of the hormone estrogen, known to fuel the growth of cancer cells. We men have lower levels of estrogen, but still enough to keep cancer cells alive. I expect to take Tamoxifen for ten years in total – just another seven to go!

Not only did I attend the wedding with a full head of hair and a relatively clean bill of health, but also – to the surprise even of Mr. Cawthorn – nine weeks after surgery I went ahead with a 1,000-mile cycle ride from Land’s End to John o’ Groats, planned before I became ill. My wife thought I was bonkers (and she was probably right) but Simon was supportive. I managed to raise £6,500 for our local breast cancer charity in Bristol, BUST (Breast Cancer Unit Support Trust) and I have continued my passion for cycling ever since, with trips across France, the London to Paris and the length of Ireland in the three years since surgery. Last year I cycled the London100 on behalf of Breast Cancer Care.

I have not had any reconstructive surgery (reconstruction is uncommon in male patients) – my chest on the right side is flatter (and nipple-less) but that doesn’t bother me, and my scar is fading nicely into the background. I continue to see Mr. Cawthorn once a year for a checkup and also see my oncologist Dr. Jeremy Braybrooke annually as well.

I have been considering genetic testing and earlier this month we met with the National Health Service specialists to discuss the process.  There does not seem to be any major downsides to getting the testing done, so I will likely go ahead and get tested later this year.

What we don’t want to fade away is the importance of making people more aware of breast cancer in men. My wife says, ‘In the beginning, I think he thought, ‘How can I tell people I have breast cancer, because that’s a woman’s disease?’ I told him he would be a trailblazer, that he could help other men.’

I’m not sure I feel like a trailblazer. I sometimes feel like a bit of a fraud to have come through the experience as trouble free as I have when compared to the experiences of many women – but I’m happy to talk openly about my case. The fact that men can get breast cancer at all is seldom mentioned and that means there’s a big chance it will go undetected. I’m certainly one of the lucky ones in that respect.

I have never met another male breast cancer survivor in person yet, but that may change now as I’m part of the Male Breast Cancer Coalition family. I learned the US group has also connected with David Talbot here in the UK. David and I have exchanged emails, we share the same breast cancer surgeon (Simon Cawthorn), were guests of the Spire Glen Hospital, Bristol UK for our respective mastectomies AND we were both featured in the BUST 25 year anniversary edition! In David’s MBCC story, he wrote about a man “who had ridden a bike from Lands End to John o’ Groats (or was it the other way round) and I knew I was not alone!” That man was me!!

So, all you men out there, you are not alone. Ensure you get routine medical checks, be aware and get any lump – no matter how small – fully checked out.