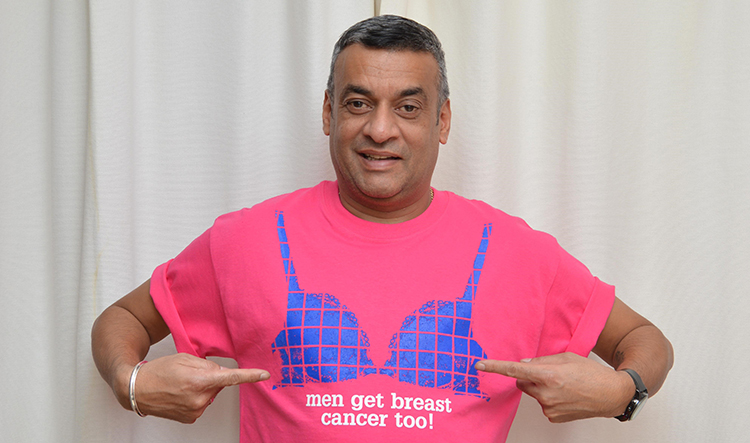 “It was my girlfriend Shirelle, who first noticed something was wrong. One night in bed, Shirelle pointed out a lump that she had seen on my chest. I had a look and was able to feel it myself, but I soon decided that the lump was probably nothing to worry about.

Shirelle wasn’t happy to just forget about it. Undeterred, she wasted no time in booking a doctor’s appointment for me. It was only a few days later, whilst visiting my parents’ house, that I found out about the appointment. Despite my objections to going, I eventually relented.

A short consultation and check-over later, the doctor had made a similar conclusion to me. He told me he was 90% sure that there were no problems and that the lump would simply be a cyst. It was good to hear and, although I was sent for a mammogram, ultrasound and biopsy, I was 100% not expecting the result I received one week later.

My sister came with me to hear my results. I was feeling relaxed about it, which made it such a huge and sudden blow when they revealed that I had breast cancer – I nearly fainted. I didn’t know anything about cancer, plus the details about my own breast cancer confused me – I felt completely in the dark about what was happening

I eventually learnt that I had a 2.5cm tumour and had fortunately caught the breast cancer at a very early stage. I needed to have an operation to remove the tumour, but didn’t need chemotherapy. From diagnosis, things moved very quickly and within a month, I was taken into surgery.

I was quite nervous but it all happened so quickly it was over before I knew it. My operation was at 7.00am, so no sooner had I woken up in the morning for the procedure, I was asleep again because of the anaesthetic. Later on that day, I was allowed to go home. It was such a surreal experience.

For me, post-surgery was a time to come to terms with what had happened. In the past month I had been whisked through a series of tests, been diagnosed with breast cancer, received surgery and was now recovering. The unexpected series of events had been exhausting. In addition, I was now taking Tamoxifen to help prevent recurrence, which had some unpleasant side-effects.

As part of my recovery, I was visiting my local Macmillan centre for extra information and support. The nurse pointed me in the direction of Breast Cancer Haven, who she said had a centre very close to me in Leeds. Whilst I had never received complementary therapy before, the idea of having some additional emotional, physical and practical support sounded great to me as I hadn’t been feeling myself since the operation.

I began by meeting with Debra, the Yorkshire Centre Manager, and chatting about the issues I’d been having since surgery including fatigue and trouble getting to sleep. A tailored programme of acupuncture and shiatsu was then designed to help alleviate stress and promote better sleep. I wasn’t initially sure what acupuncture and shiatsu were but I believed Debra when she told me they would help me. She was right. The sessions were very relaxing and reduced my sleeplessness. The therapists also gave me some helpful advice for my day to day routine and diet.Even though I was

the only man using the Yorkshire centre at the time, the staff were so kind and welcoming to me. I didn’t feel strange at all being there – it was a shared space for everyone.

I may have been lucky to discover my breast cancer early and promptly get the tumour removed, but I want my experience of breast cancer to be able to help others.

I want to move on now and something that is helping me to do that is to use my experience to help raise awareness about breast cancer amongst men. I want more men to know that they can get breast cancer and how they should check themselves. I have been on radio stations talking about breast cancer in men, I organised my own huge Bollywood Garden Party fundraiser to fight cancer and even starred as the only male model in a charity Fashion Show.

I think the hardest thing as a man is visiting a doctor or telling somebody if you suspect something might be wrong. But doing nothing might make it worse. I hope that by speaking out about the issue and chatting with other men, they can open up about their concerns and find the courage to get themselves checked.

I feel so lucky that my partner and sister were so proactive in detecting the lump and arranging for me to go to the doctors. They probably saved my life”.

Amrik is working with UK breast cancer charity Walk the Walk on their Men Get Breast Cancer Too awareness campaign.