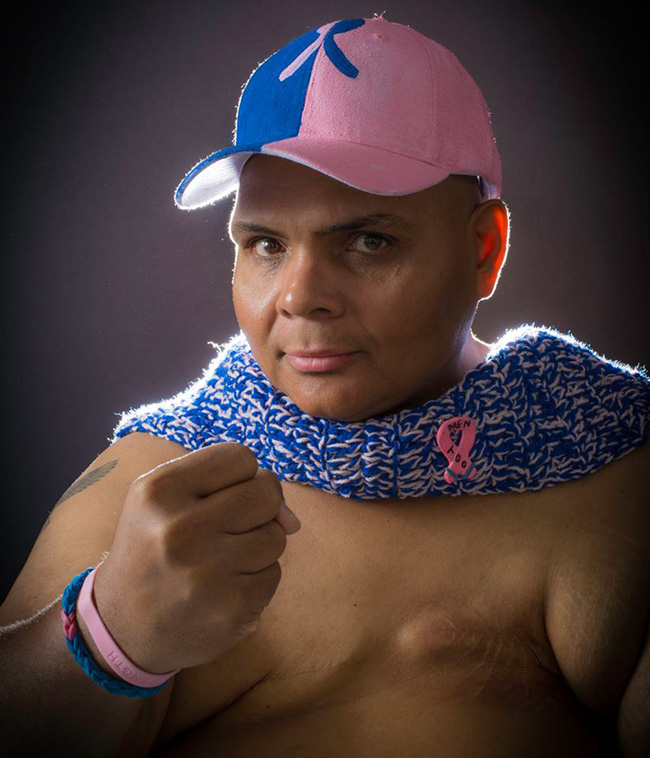 By Ambrose Kirkland
May 2015

On November 01, 2001 I was diagnosed with breast cancer. This condition may not raise eyebrows unless it happened to you and you happened to be a woman. In my case, breast cancer raised more than a few eyebrows since I am a man. Believe me I was shocked and surprised. Nevertheless, I went through a mental experience that few men ever stop and think about, even in their wildest dreams.

I guess you could say I found this lump many years ago. I just didn’t pay too much attention to it. I knew I had problems with my breast size, but always thought that it was due to the fact that I was heavy. Guys who are fat usually have a lot of fatty tissue, so that’s what I thought it was. I’m sure people noticed that I had larger breasts than most men, but I didn’t know that it would turn out to be cancer.

I was on a mission to suppress them. I would wear small tee-shirts, sometimes wearing them two sizes too small. I would even go as far as getting an ace bandage and wrap it around my breasts. The best thing that worked for me is when I wore a medium to large tee-shirt and had sewn up the sides to compress the breast area. This tactic seemed to work for me for seven or eight years. As a matter of fact, I kept up the deception until October 2001. Keeping my breasts under wraps was not an easy job as you can see.

Before my breast biopsy I did not or would not say anything to anyone, because I just thought it was a twinge of pain here and there. When I did discover the lump, it was April 2001 and I ignored it until late August 2001. That’s when I started noticing little spots of blood on my tight white tees. That’s when I started thinking, what in the hell is going on now? A lot of things went through my mind, but a discharge from my nipple, that was the furthest thing from my mind. The spots started getting larger and larger and when I woke up I would see more and more blood.

The months of September and October were spent going back and forth to doctors and taking endlessly about a battery of tests. I actually had to get a mammogram. I don’t see how women can get a mammogram every year. Next I was seen by Dr. Sieloff and he said my lump was probably a cyst. They also found some calcification’s  from the mammogram, the doctors wanted to make sure that was all it was, so I had a biopsy on October 30, 2001. Since I had my biopsy, I still wore my t-shirts sewn up the sides, not to hide my breasts, but to support them. I had to wait all week for the results.

My mama and I were on separate phones when the doctor called with the results. When Dr. Sieloff said the word “malignant” Mama and I locked eyes at that instant. Not only did I see the pain in her eyes, but I saw my life from my birth up to that moment. It was a look that I will probably never see again, a mother’s love for her child. I will always remember this look as long as I live. We were told I had to have a bilateral mastectomy.

I needed to tell my family and close friends, then had my surgery on December 13, 2001. Even though both breasts had been completely removed, I still actually felt something going on inside of me. I had a somewhat semi-conversation with my sister Angie. We talked about God and how maybe he gave me this cancer because I was stronger. If one of the women in the family had developed breast cancer, like maybe our Mama or younger sister Reba, I was probably a bit stronger than they were. I try to help people to understand that I hated having it. I wish I didn’t have it. So that’s how the conversation went. Mostly, she tried to make me understand God’s point of view on the reason why I have this terrible disease. I felt that when God needed me to feel him or understand him, I wouldn’t. So now that I needed him he’s not available to me. Now trust me, I’ve believed all my life, since my childhood that he existed. There have been some times when I probably doubted him, I’ll admit that. But even though I did doubt him, in the back of that doubt, in the back of that cloud, I knew that he really did exist. But it’s like at that time, I knew he’s there, but I felt as though he really doesn’t have time for me because there are poorer people in the world. Coincidently, when I first found out I had cancer, it was right during the time of the World Trade Center 9 /11 crisis, when the attack on America happened. I told Mama that the reason God didn’t listen to my prayers was that he’s too busy with the people up in New York. He’s too busy with their lives, so maybe that’s why he’s really not listening to my prayers. With everything that’s going on up there, maybe he doesn’t have the time to listen to what I have to say. I’m so thankful I was wrong in my beliefs.

From June 2002 through July 2002 I endured ten and a half weeks of radiation at The Northeast Cancer Center of Florida. I was told I couldn’t have chemotherapy because the estrogen in it would make me even sicker. Radiation wasn’t better. I spent days on the sofa in pain or nauseated. I lost the taste for food. I smelled flesh burning most of the time, and like always it turned out to be mine. In the early part of 2013 I met a young man online by the name of Alan Blassberg, who taught me about the BRCA gene, also known as the breast cancer gene. All those years of going back and forth to my doctors and all my doctors knowing of my family history of  breast cancer and it took me going online to discover I might be a carrier of this gene mutation. I was angry. Not at Mr. Blassberg, but at my doctors. They knew. They should have informed me. It’s terrible how men are treated in the medical field when it comes to breast cancer. Mr. Blassberg reached out and led me in the right direction.

Sadly on October 19, 2013, my biggest supporter, my mama Lora Kirkland passed, but I continue to fight on with her spirit beside me. I’ve had quite a few scares with the cancer trying to come back in 2014. I’ve had a few lymph node removed and a small benign mass removed leading up to my BRCA testing.

I just recently received my results. I’m negative for both the BRCA1 and 2 gene mutations, but once again I’m faced with the unknown. That’s because I have two gene mutations fairly new called MRE11A and NBN. The research available is only for women and I’ve yet to find any information out there for men. So once again I find myself a rarity in life.

I’m in remission now. I continue to fight every day for all persons with breast cancer, especially men.