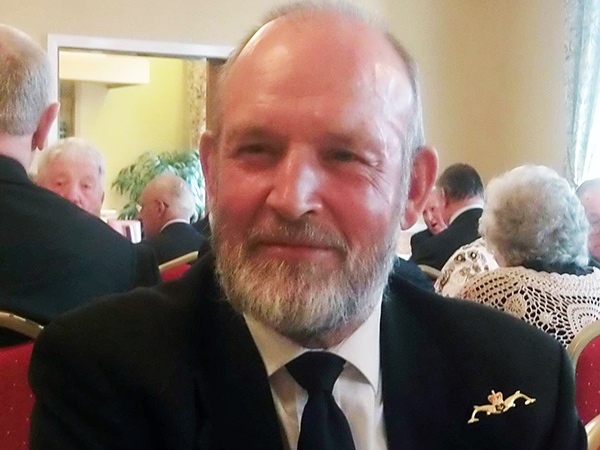 Late in February 2012 I was falling asleep when I felt uncomfortable and my left breast was itching by the nipple. Being a man I scratched gently and I felt a lump! I knew that wasn’t normal, but decided to study further in the morning. When I awoke, the lump was still there. It was painless even when pressed, feeling something like a pencil eraser.

Being a long distance runner, I sometimes get nipple rub and some mastitis, but this was neither. As a registered nurse and sport masseuse I knew what it wasn’t, but not what it was. After I waited a couple of days to see if there was any change, I made an appointment with my local doctor. She examined me, washed her hands, and said, “Well I don’t think it’s cancer as it’s smooth, but I’ll send you for a mammogram just to be safe.”

Cancer? That diagnosis hadn’t even crossed my mind. I thought maybe a cyst from irritation since I had just got back into training for my next marathon.

It was strange sitting outside the X-ray/mammography department surrounded by several scared couples. I was a man alone. The strange looks turned to confusion when I was called in, something I have become used to over the last two years. A male mammogram is fun, a bit like catch the wet soap, but eventually the poor ladies succeed. I had to wait in the changing cubicle while they got ready for an echo scan. I was called back in and noticed an immediate change in the mood. It was distant and professional, the fun was gone. When the echo was done I then had a biopsy taken from the lump and also a sample from the lymph gland. This hadn’t been planned. I asked the technician “off the record” how it looked.  He said,“50/50,” but he lied.

That evening I took a good look at myself in the mirror and sure enough very faint but yes there was some dimpling under the nipple, a slight deformation and some dry flaky skin. I didn’t realize at the time that these could be symptoms of male breast cancer. When I Showered I couldn’t feel the lump even though I knew it was there. Only with a fingertip search could I find it.

March 5th I had an appointment with the surgeons. My daughter came with me and I had warned her of the very likely result. It was confirmed, invasive ductal carcinoma stage three with lymph-gland involvement. The second part I found very disappointing.

I don’t know whether I am one of the 400 British men or the 100 Dutchmen diagnosed each year since I’m a born-and-bred Brit now living in the Netherlands. I knew men could get breast cancer, in fact I had worked on a breast surgery ward and had run an oncology clinic. The things that terrified most people for me weren’t so scary. My thought was the classic line, “Houston, we have a problem.” I was a Medic on Nuclear submarines, so there’s no panic when things go wrong.  The dark sense of humor would come in handy over the next months. I tried to get some information about male breast cancer, but found searching for the Holy Grail would be easier.

Statistics, if there were any, varied but average out that I was 1 of the 1 in 100,000 men affected. I make up just 0.02% of male cancers and 0.9% of breast cancers but all the breast cancer information is for women. The line drawings for exercises were of women. Three quarters of the information I was given was about bras and prosthetic wigs. Return to work instructions were all about washing, vacuuming, cooking, housework, etc.

April 11th was my date for surgery. Again, it was not scary as I had seen the operation several times in theatre while on my E.M.T course. I awoke with my own chain mail vest and a couple of drains. The tumor was gone along with 18 lymph glands of which 12 were affected. There had been a red face and changeto my operation bed. It had been labeled “Mrs. Herbert.” The same confusion happened when I began Chemo. The poor receptionist almost had to see the scars to prove I was a breast cancer patient. Three doses of F.E.C followed by three doses of Taxotere. I was apprehensive about that, didn’t know what being sick meant. Even pneumonia had only knocked me down for a week. When it came to my last treatment, I was being dragged along by my little Shih Tzu dog.  I was exhausted after 500 yards, staggering along, gasping for breath, eyes streaming, not a hair on my body. That’s me a long distance runner and mini tri athlete, outdoor man and sailor. It was the toughest thing I have ever been through. That was followed up by seven weeks of radiation. Again, having worked with radiation, which was the most probable cause of the problem anyway, it had no fear factor for me. I did burn a bit toward the end of treatment.

I am now taking Tamoxifen for five years and have developed lymphedema in my left arm. When looking back, the lump may have been found a couple of years previous during play with my late fiancée. She felt a lump and it was a little sore, but I put it down to irritation from running training.  As the soreness went away it was forgotten in the shadow of my fiancées terminal lung disease and severe bouts with arthritis.  Was it the same lump? I’ll never know, but seeing how many lymph glands were affected it probably was.  If only I had known more about male breast cancer.

Everything is going well now and all tests have been clear.  I am living life to the fullest.  I have had to adapt slightly because of the remaining neuropathy, which tends to mess up my balance a bit.   The radiation has damaged my left lung, the lymphedema is annoying and my joints are creaky from the Tamoxifen, but that has not stopped me.  On my 67th birthday back in April 2015 I climbed Ben Nevis in Scotland along with my family. The last 600 feet were ice which would have made most people turn back, but we didn’t. Then we walked and backpacked the Great Glen Way from Fort William to Inverness some 117 kms. Only on the climbs did I have to go a bit slower as my lungs were only capable of 80%.

I participated in the Color Viking run, a 7 km obstacle race, in Arnhem on September 5, 2015. I wore my “Men Have Breasts Too” T-shirt!  It’s been a battle to get back to some sort of fitness routine, but so what.  I was there and that’s what counted! The run was a great success. I finished in a reasonable time, and was in fact helping people many years my junior over the obstacles. Being ex-military helped a lot. The mud was deep, the day fresh, and the lake warmer than the outside air. I took a leisurely swim. The side effect was a bit of a cold, which also went down onto my lungs. The cold never really kicked in, but just sat in the background dragging me down. A persistent cough and shortness of breath both slowly got worse no matter what I did. We all know the black cloud that haunts us. Could this have been stage 4 to the lungs? I mentioned the problem at my oncology review. He took it seriously and referred me to the lung specialists. X-Rays and scans were done as they thought it could be an embolism caused by the Tamoxifen. There was no blood clot, so they booked me in for an allergy test. I caught another cold and hit it with everything I could to feel better, including a homeopathic immune system booster Echinacea Forte. That worked. The translucent wallpaper paste I had been coughing changed color and my body started fighting the infection. When I went back for more tests, the shortness of breath was gone. My lungs were working properly again. All the tests were negative.

While I was sitting in the waiting room waiting for the results, the door to the exam rooms opened. The specialist called out, “Mrs. Herbert!” I said, “Try MISTER.” “But, but I saw breast cancer,” she stammered. I had to  explain to a senior specialist men also get breast cancer.

Sadly the lung problem had messed up my training for the Slachte marathon on June 4th. It was one of the first hot days of the year. All was going quite well until I had to do a 250 yard sprint just before the halfway point. My calf muscles topped up with lactic acid. I tried interval running to no avail, so had to walk the last 10 miles. I had a poor time, but what the heck, I did finish.

I wrote a book about my journey with breast cancer. “The Pink Unicorns of Breast Cancer” was released September 29th and is available from Amazon. I had been playing with it for a couple of years. Finally the repeated shock, horror, disbelief and denial of male breast cancer became too much to NOT finish my book and have it published to help others too.

I had planned to go to the book release in England, but alas another problem raised its head. The technical name was Amaurosis fugax, or temporary blindness in one eye. A form of TIA, a minor stroke. I had three attacks about a week apart. The first two were mild lasting about two minutes. There was just a blurry patch in my right eye. The third was much more intense with about 90% total blindness in the right eye for some 10 minutes.  Houston we had a problem! My problems were caused by a blood clot. My immediate thoughts went to Tamoxifen as it is one of the more common side effects of the drug. I stopped that immediately and the hospital put me on anticoagulants. An echo found my neck artery was partially blocked. Also a small leak in the heart septum was found allowing blood to pass from right to left. This is also a possible cause for blood clots. They surgically removed the blockage in the neck artery reducing my chance of a stroke from around 98% to 2%. As the operation was quite serious, I have had to cut back on my activities a bit. Instead of going to England on my motorbike the 13th of October for my ship’s reunion, I went by train and plane.

At the moment there seems to be a lot of movement in genetic male breast cancer. I have heard of men being called up for testing for BRCA mutations after females of their family have been found to be carrying the faulty gene. Thankfully, I was BRCA negative. In fact, after a wide range study, they could find nothing genetic for any form of cancer, which strongly backs up my claim my cancer was caused by my work with radiation.

For now, I’m thinking about pink unicorns. It seems they are beginning to make themselves known.