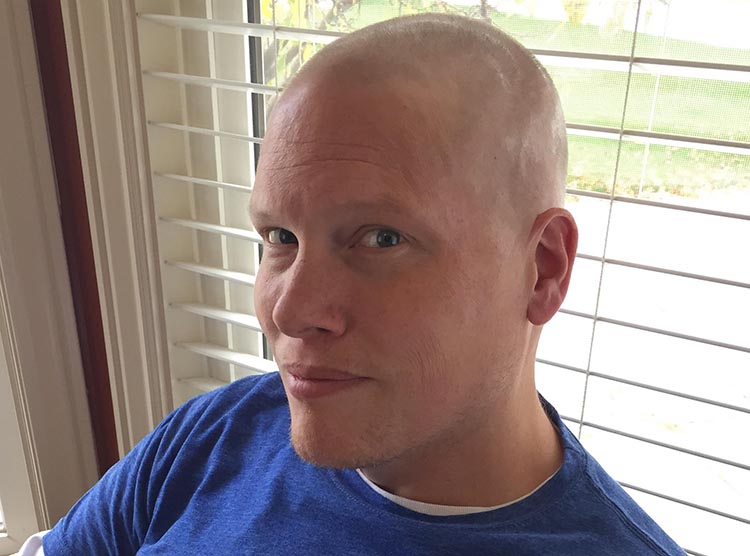 If I had not waited, and acted even a month sooner, a lot of heartache could have been avoided.

It was in the fall of 2011 when I was putting something away in the garage. As I moved, there was a bit of discomfort on my chest. Not thinking much of it, I waited about a month before I told my wife Michelle. She made me go in right away to get checked out.

We went to our family doctor, but he didn’t seem concerned. Nevertheless, he referred us to a general surgeon who we went to see a few days later. At that point, the lump on the right side of my chest had swelled and became more tender. The surgeon didn’t seem concerned either, but scheduled a lumpectomy for a month later.  By the time I had my surgery, the lump had doubled in size. Michelle kept asking if the lump could possibly be cancerous, but the surgeon dismissed the idea. He said that if I had breast cancer, I’d be famous. He really didn’t say anything more than that. It was just going to be a routine lumpectomy to remove what seemed to obviously be a benign mass. I didn’t worry that much, but Michelle was still concerned.

The procedure went smoothly, and recovery was pretty quick and relatively painless. A few days later the surgeon called Michelle and I back to his office. As we walked in, he stood there with a perplexed look on his face and a folder in his hand. He broke the uneasy silence with the words “I don’t know what else to tell you. You have breast cancer.” It felt as if the air had been sucked from the small examination room. He was shocked at the lab results, and so were we – a 3.5 centimeter invasive ductal carcinoma and another tumor in a milk duct, or in other words, “ductal carcinoma in situ”. I was 38 at the time, and I had breast cancer. Yes, men have breast tissue as well – it’s just not developed like women. None of it seemed real. A 38-year-old male with breast cancer? With this new information the surgeon’s attitude had changed significantly. He said it was very important that another surgery be performed as soon as possible to determine if or how far the cancer had spread. I would need to have a mastectomy, and lymph nodes would need to be inspected.

Honestly, we had no idea what was going on and what any of this was going to entail. We didn’t even know what questions to ask. The surgeon wanted a radioactive tracer injected in my chest with a dye to aid him in finding the lymph channels leading to the main lymph nodes in my right armpit. It was pretty painful as the technician injected the radioactive stuff around my right nipple. Days later, we went in for the mastectomy. When I came to, I was in horrendous pain. The surgery was a success, but in the process of inspecting the five main sentinel lymph nodes under my right arm, they found another tumor. All five sentinel nodes were removed, then more general anesthetic had to be used to keep me under as they inspected then removed the eight secondary nodes. No more tumors could be seen. Thankfully, in the days that followed, the tests showed no other trace of cancer in those secondary nodes. I was diagnosed with stage 2B breast cancer. It was hormone receptor positive, HER2 negative. Given the history of cancer in my family I asked the oncologist about genetic testing. He felt it would be a good idea since I had four children of my own, three girls and a boy. Thankfully the BRCA1 and BRCA2 tests came back negative.

On December 1st 2011, I started a dose-dense schedule of aggressive AC+T chemotherapy, which lasted until the spring of 2012. The treatments were really hard and the side effects at times were dreadful. I lost the ability to taste or smell normally, my stomach lining was stripped, I was nauseated all the time and the shot I received the day after a treatment caused major bone and joint aches. I also lost every hair on my body. All of this was to be expected. When the chemo treatments were done, I started hormone therapy.

As we emerged from the fog of cancer fighting, and the effects of treatments wore off, life seemed to return to a sense of normalcy. Everything changed in the early Fall of 2015, and no one could have prepared us for what would come next.

I had only been on Tamoxifen hormone therapy for 3 years when I started to feel a pain in my chest bone and persistent dry cough. During a routine six-month oncologist visit, I told the doctor how I felt and he ordered a chest X RAY. The results had some irregularity, so he then ordered a CT scan. I was at work when I learned about some concerning abnormalities in my scan and was told they looked cancerous. The oncologist ordered a PET scan, and the results were grim. The scan showed my cancer had spread to my spine, chest, hips, lungs, and various lymph nodes. I was instructed to stop taking the hormone therapy pills. Stopping cold turkey resulted in two weeks of hellish anxiety, pain, and alternating hot and cold flashes. I never went back to Tamoxifen.

In October of 2015, my oncologist changed my diagnosis to stage 4 metastatic breast cancer, and started me back on Taxol chemotherapy (the “T” in “AC+T”). The plan was to do weekly infusions for three weeks, then one week off before starting again. Once a month, I also got an infusion of a drug that rebuilds my bones. The doctor ordered a brain MRI, and soon enough we learned that the cancer had also spread to numerous places around my brain.

After completing my fourth infusion of chemotherapy, we headed over to the radiation oncologist to get fitted with a mask. It was formed to my face and head, and when hardened, could then be snapped into place on the table to keep me from moving. We didn’t want the radiation hitting the wrong place. Also, the chemo treatments were put on hold so I could complete fifteen consecutive full-brain radiation treatments. The oncologist said that it would be unsafe to overlap both the chemotherapy and radiation treatments.

Around this time, some of our friends contacted a local foundation called “Anything for a Friend.” They are a small group of volunteers who seek to provide an avenue through which family, friends and the community of someone dealing with personal tragedy can band together to show support. They believe that by organizing a community fundraiser, both the friends and the benefactor are able to minimize much of the fear and anxiety related to personal tragedy and find satisfaction through such an event, ultimately benefiting the entire community. In order to qualify for this, letters of recommendation were submitted on our behalf by close friends who had known us for a long time, recommending that my family and me be considered as recipients of the proceeds raised. As a result, we were accepted as the 34th beneficiary, and plans were made to do a 5k run, an auction, and many other fundraising activities. The “Anything for a Friend” event held on November 14th, 2015 was very successful, and we were overcome with gratitude by the generosity of so many people who helped out and attended the event!

Despite the outpouring of support, we were starting to feel numb while staring into the face of full-on metastatic cancer and what that might mean. My energy was declining, and the steroid I was taking daily, dexamethasone, was making me feel weighed down and drained. At least it was keeping the swelling down in my head. The doc also thought that it would decrease the pressure a small tumor in my head was putting on some nerves, making my right eye blurry. I was also losing muscle mass because of the steroid and started a plan to taper off.

I felt like things were off. As we planned for the next round of chemotherapy treatments, I started to get really sick. Believing I was just getting a cold, I spent night after night taking cold medicine, coughing, and getting more and more miserable. Finally, Michelle brought me into the emergency room where tests discovered my blood oxygen levels were extremely low. After a long night in the ICU, my condition worsened and I was intubated so my body could have a chance to heal from some really bad lung inflammation. It was unclear whether I had a super-bad case of pneumonia, or if something else was causing the inflammation. The latter seemed to be the case. Only after my wife prompted the physicians to collaborate with my oncologist did they focus less on the antibiotics, and more on some steroids (other than dexamethasone) to address the lung swelling.

Ultimately, I was intubated for six days in the ICU, and had to spend another six days recuperating before being released with a walker and an oxygen tank. I was a mess, but thanks to the quick thinking of Michelle and some key collaboration between my attending physicians and my oncologist, I was alive, up and around, and on my way home in time for Christmas! I had so much to be thankful for. I was emerging from what seemed to be an enormous black hole, the doctors and nurses were amazed at my progress, and I worked to prepare myself to continue the cancer fight!

The Taxol chemotherapy was likely the cause of the lung inflammation, so the oncologist prescribed a new drug, Ibrance, specifically used by postmenopausal women with the same variety of breast cancer that I had. As I prepared for the new battle plan, I again had to be admitted to the emergency room due to really high blood pressure readings. While there, my oncologist ordered a CT scan with contrast. I had multiple pulmonary emboli (blood clots) in my lungs. The same physician who had worked with my oncologist while I was recovering from the lung inflammation released me with a prescription of a blood thinner called Enoxaparin sodium (also known as Lovenox), with instructions to inject it into my belly twice a day… indefinitely. Thanks to my wife’s coaching, I can now inject myself!

As if dealing with cancer wasn’t hard enough, I also had to fight with my insurance company to cover my new oral chemotherapy treatment. It’s called Ibrance – a pill I would take daily, and it would be the best chance I would have at fighting my particular variety of advancing stage 4 breast cancer. They initially turned me down because I wasn’t a postmenopausal woman, but after some back and forth, which involved numerous phone calls, a personal letter, and a statement of urgency from the oncologist, my insurance company agreed to cover the drug. I take Ibrance in the evening along with the hormone therapy drug Femara for twenty-one days, and then I take a seven-day break before starting the cycle all over again. As it turns out, one of the many possible side effects of my new treatment is blood clots in the lungs. Good thing I’m already on the blood thinners! We see this as yet another little miracle!

Our friends, family, and community continue to bolster us up, pray for us, and are there for us. We could not get through all of our challenges without them. Their support and selfless giving and compassion have really been an inspiration to our family and we are forever indebted to them as we continue this fight to beat down breast cancer!